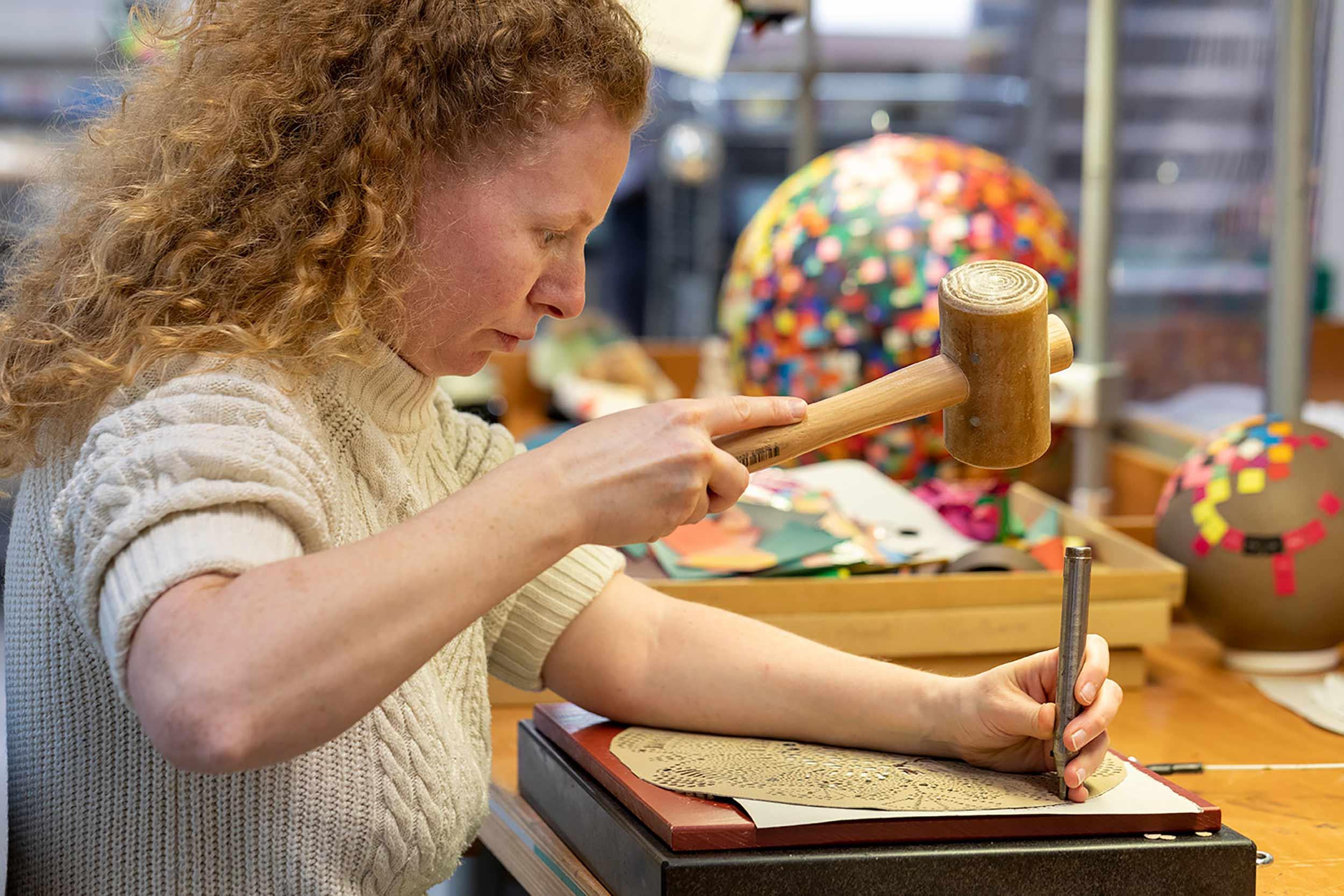 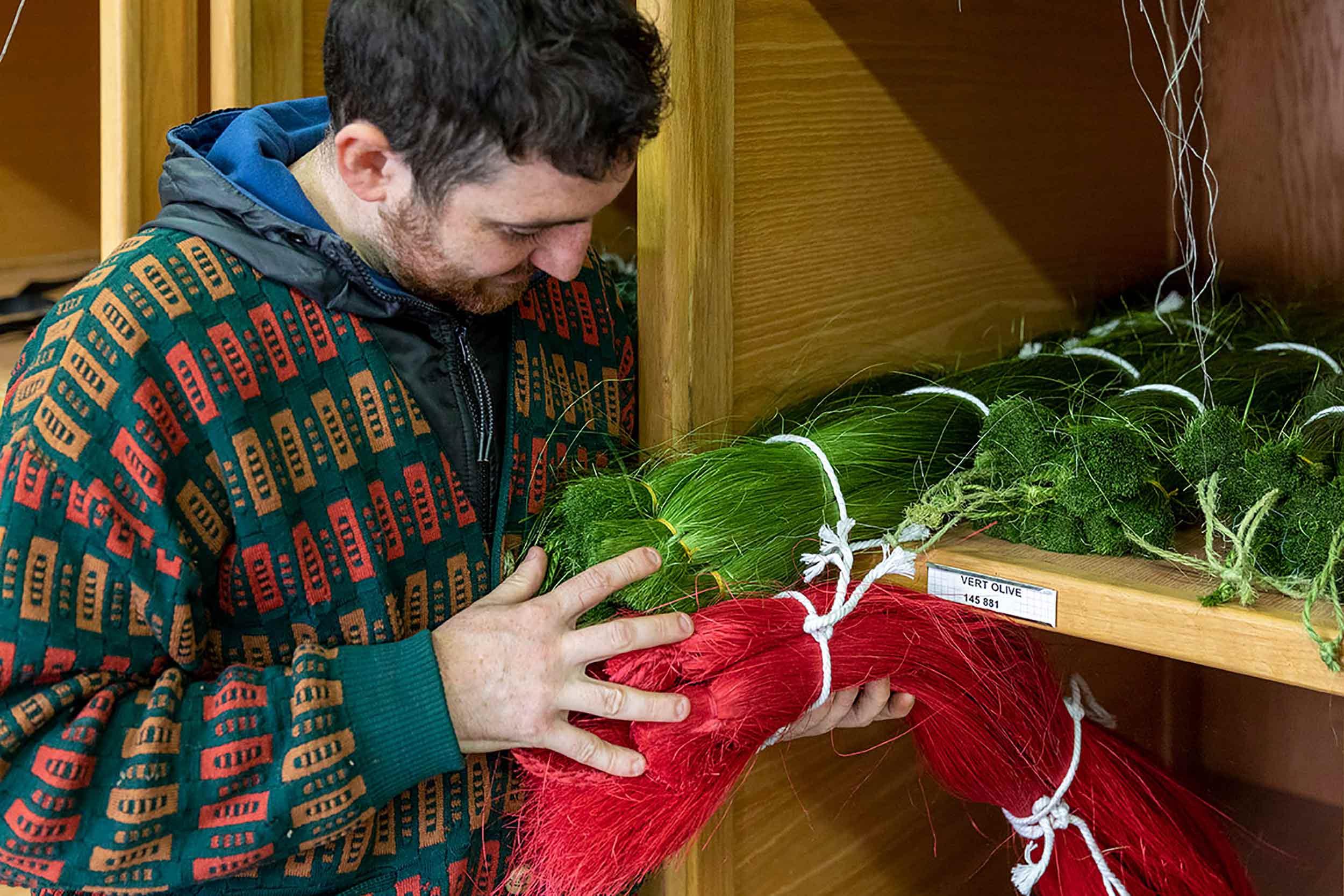 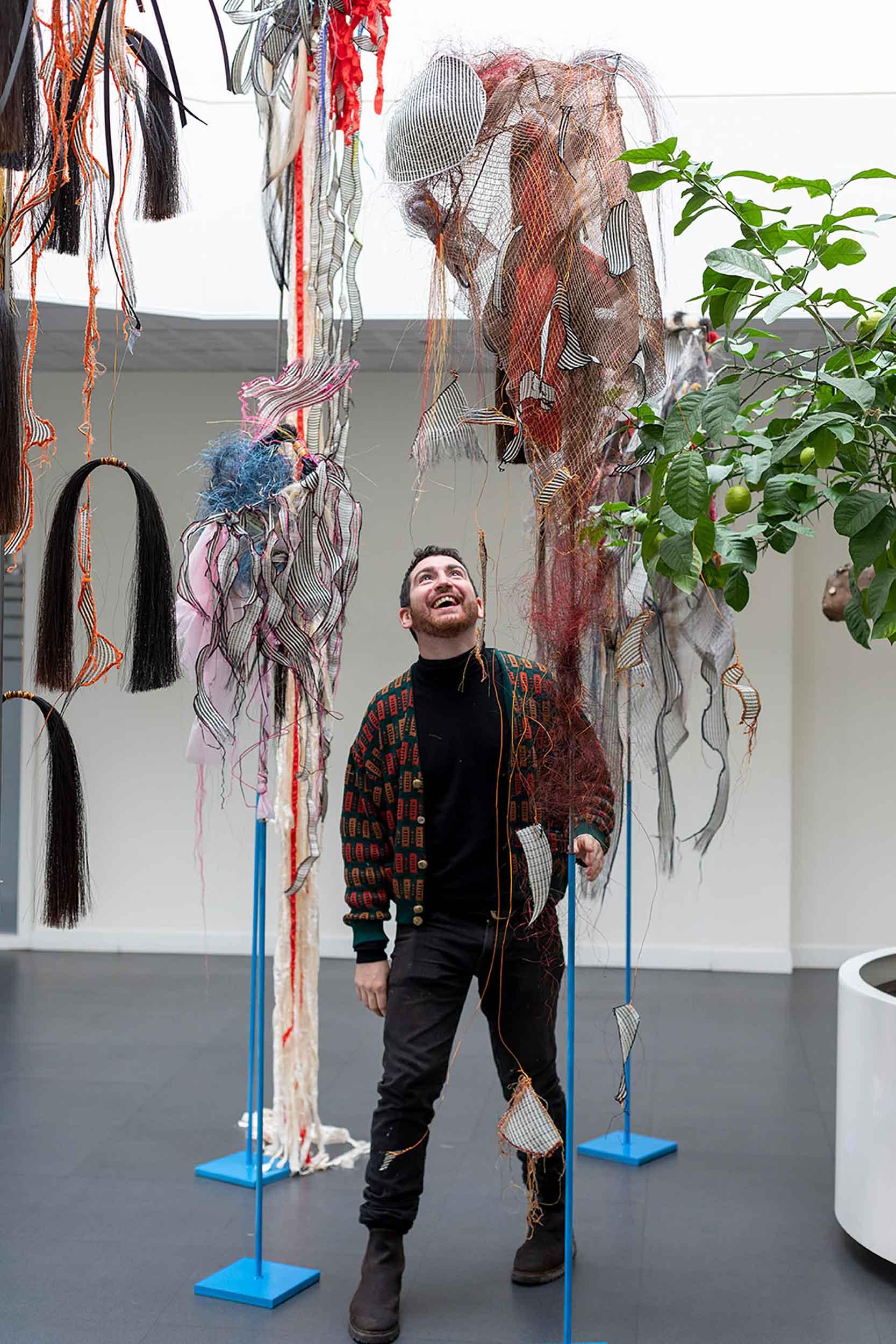 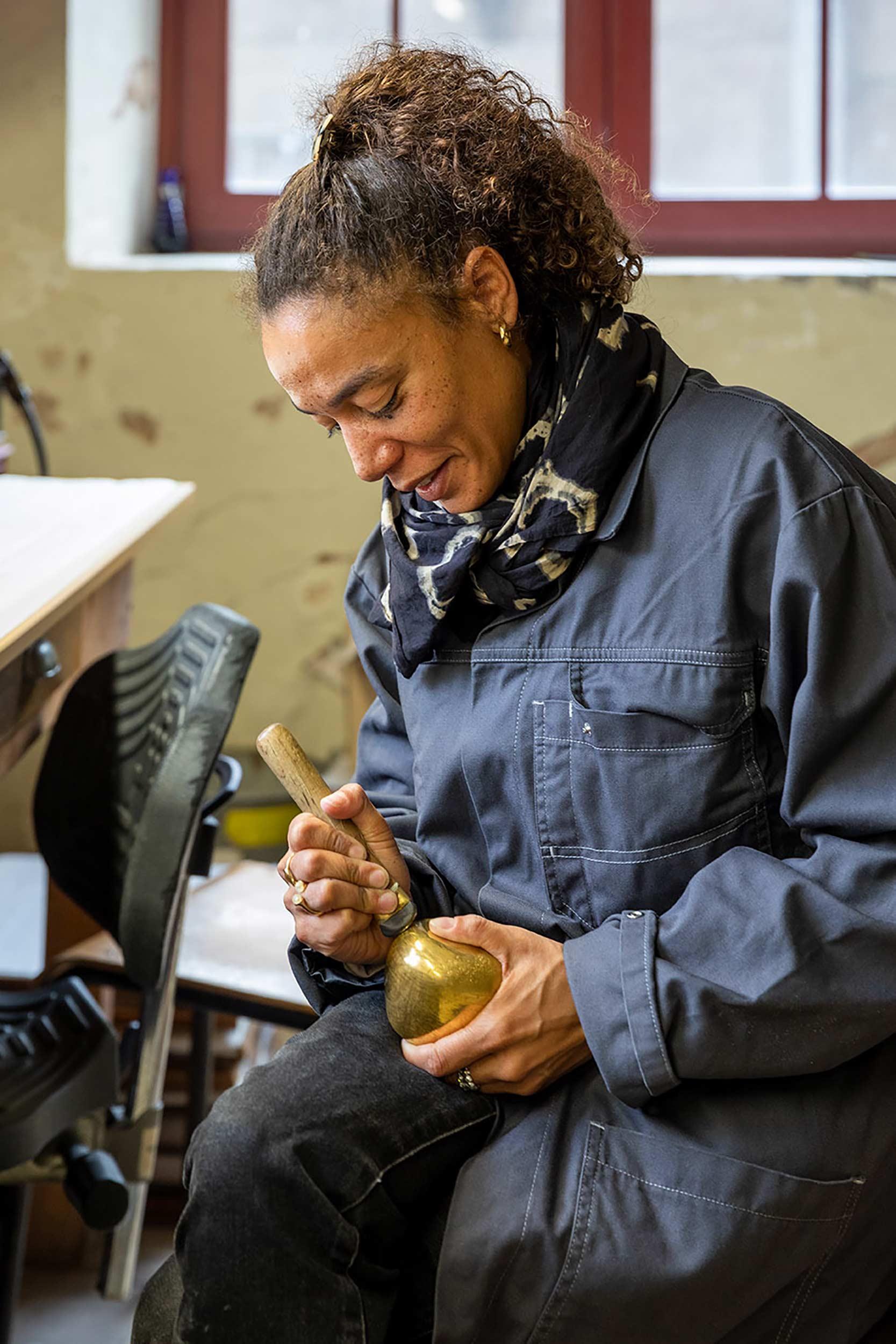 Chloé Quenum, "La Grande Place" © Tadzio
The Artists’ Residencies programme continued in 2020, once again offering new creative perspectives in workshop settings. Bérengère Hénin, Enzo Mianes and Chloé Quenum immersed themselves in the wealth of exceptional skills at Hermès production sites, producing original works in leather, horsehair and crystal respectively, all the while collaborating with Hermès artisans and drawing inspiration from their gestures.

First launched in 2010, the Artists’ Residencies programme welcomed three new artists to Hermès workshops in 2020, with two sites participating in the programme for the first time.

Bérengère Henin (b. 1983), a graduate of the École Nationale Supérieure des Beaux-Arts de Paris, discovered leatherworking skills at the Manufacture de l’Allan, a new Hermès workshop opened in 2018 in the Doubs department. Mentored by Françoise Pétrovitch, Henin brought with her the biting sense of humour that runs throughout  her work. Selecting her materials from leftover swatches of leather, she created an installation that evokes the aftermath of a party: a disco ball in leather marquetry, stitched and perforated streamers and doilies, and even a cheeky, leather-covered mechanical fish. At once joyful and melancholic, this all-leather installation entitled La Fin de la fête (“The Party’s Over”) updates a long tradition of still lifes in art through its multifaceted exploration of the gestures of leathercraft.

A fellow graduate of the École Nationale Supérieure des Beaux-Arts de Paris, Enzo Mianes (b. 1988) carried out his residency in Challes, in the Sarthe department, at a workshop specialising in the hand-weaving of horsehair. Over the course of his stay, Mianes got to grips with a historic Jacquard loom in a first for the Artists’ Residencies programme. Likening the perforated cards used to plot the loom’s woven patterns to a musical score, Mianes composed a soundtrack using found objects before literally “weaving” his melody. Under the mentorship of Michel Blazy, Mianes then joined the workshops of Holding Textile Hermès in Bourgoin-Jailleu, in the Isère department. There, he covered objects in his fabric-score and in silk offcuts to create sixteen hybrid sculptures that are presented together with his musical composition under the title La Portée du geste (“The gesture’s reach”).

The third and final laureate of this edition of the programme, Chloé Quenum (b. 1983), worked alongside the artisans of La Cristallerie Saint-Louis in the Moselle department, a site that has been a fixture of the Artists’ Residencies programme since its first edition. Quenum, also a graduate of the École Nationale Supérieure des Beaux-Arts de Paris, was mentored by Isabelle Cornaro. Adopting an approach inspired by anthropological and historical research, she devised a participative project that foregrounded the particular skills and knowledge of each glassmaker at Saint-Louis. Assigning a symbolic piece of fruit to each craftsperson, she produced some 120 crystal fruits that were customised using an array of skills linked to crystalware. The collection of fruits thus serves as a collective portrait of the Saint-Louis craft community. The work’s title – La Grande Place – borrows the term that designates the most skilled craftspeople to complete this bountiful homage.

Disciplines
Visual arts
Craftsmanship
France
In 2020, artists Bérengère Hénin, Enzo Mianes and Chloé Quenum will undertake residencies at Hermès workshops.
Following a period of immersion in the workshops, the artists will create original work that will draw on the unique craft skills of each site.
For the first time, the art of horsehair weaving and plaiting features amongst the craft skills that the artists-in-residence will discover.