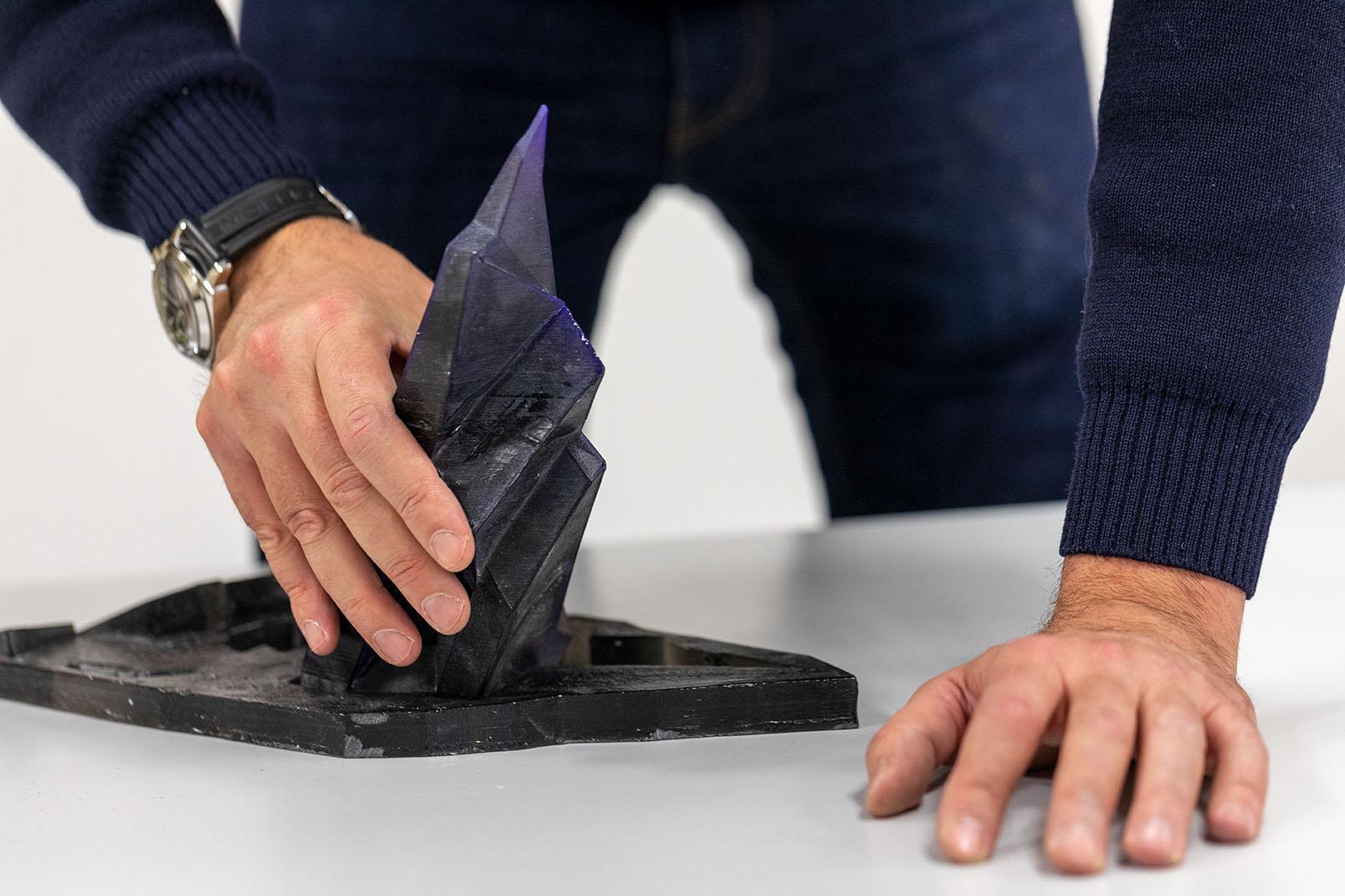 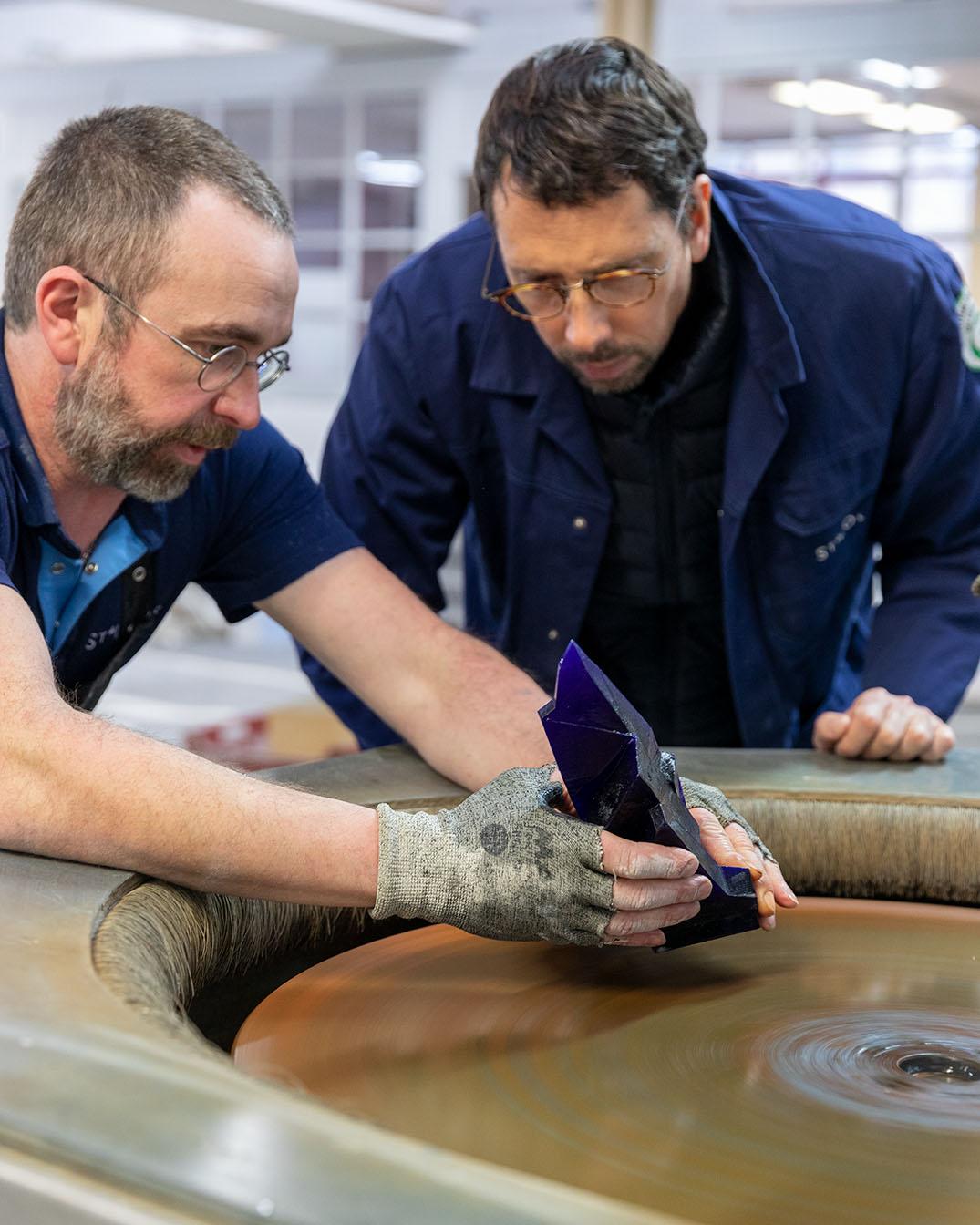 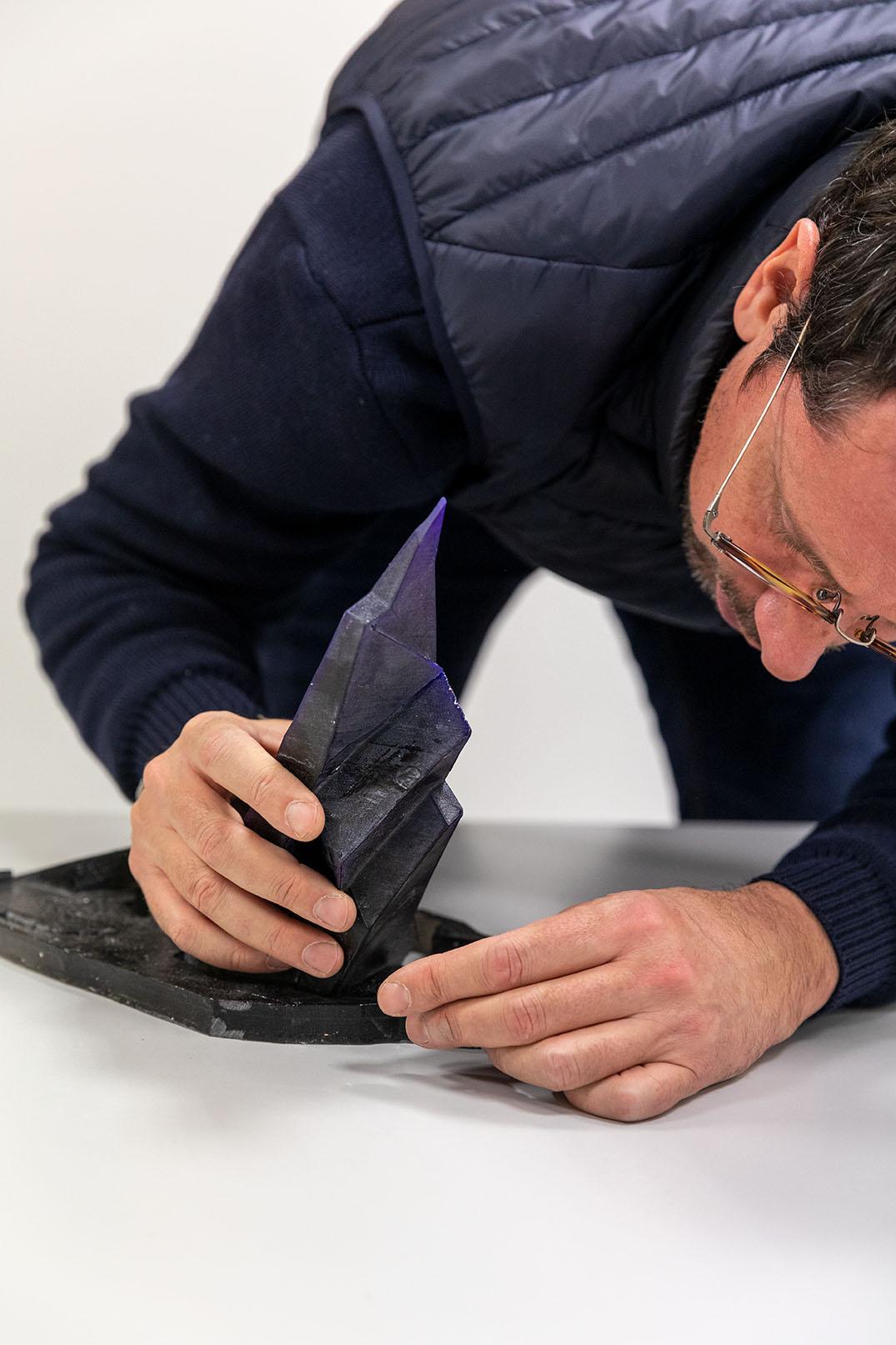 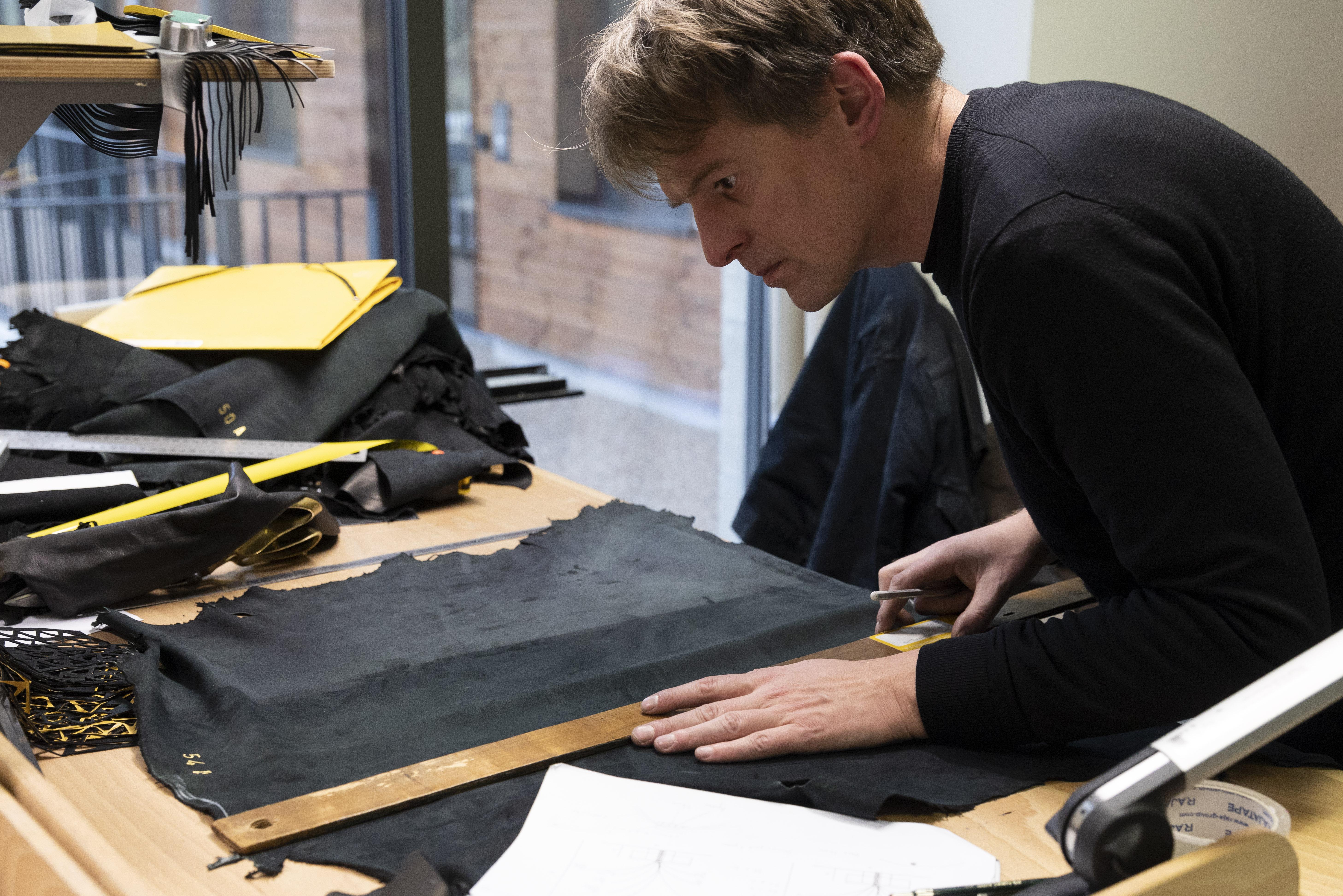 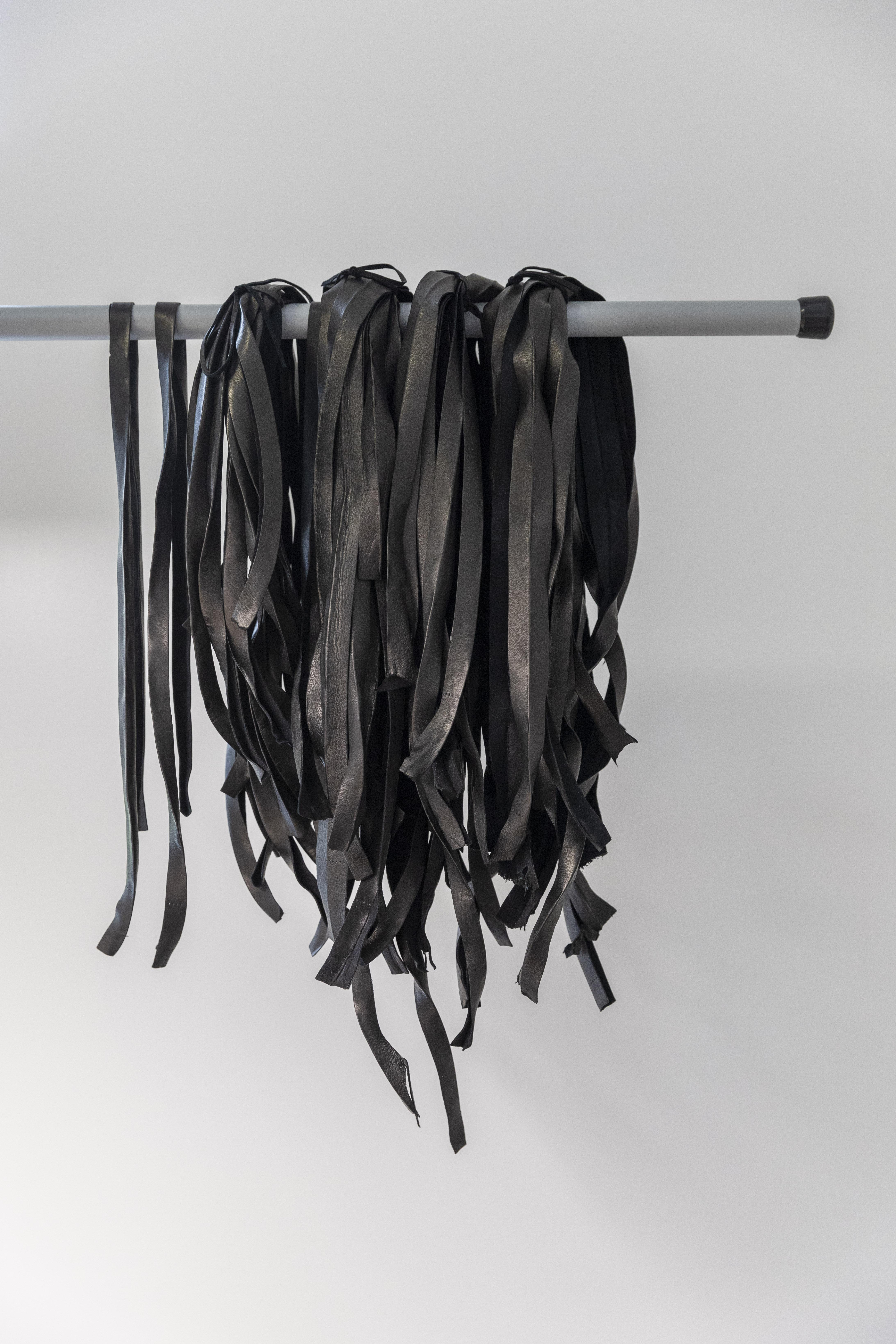 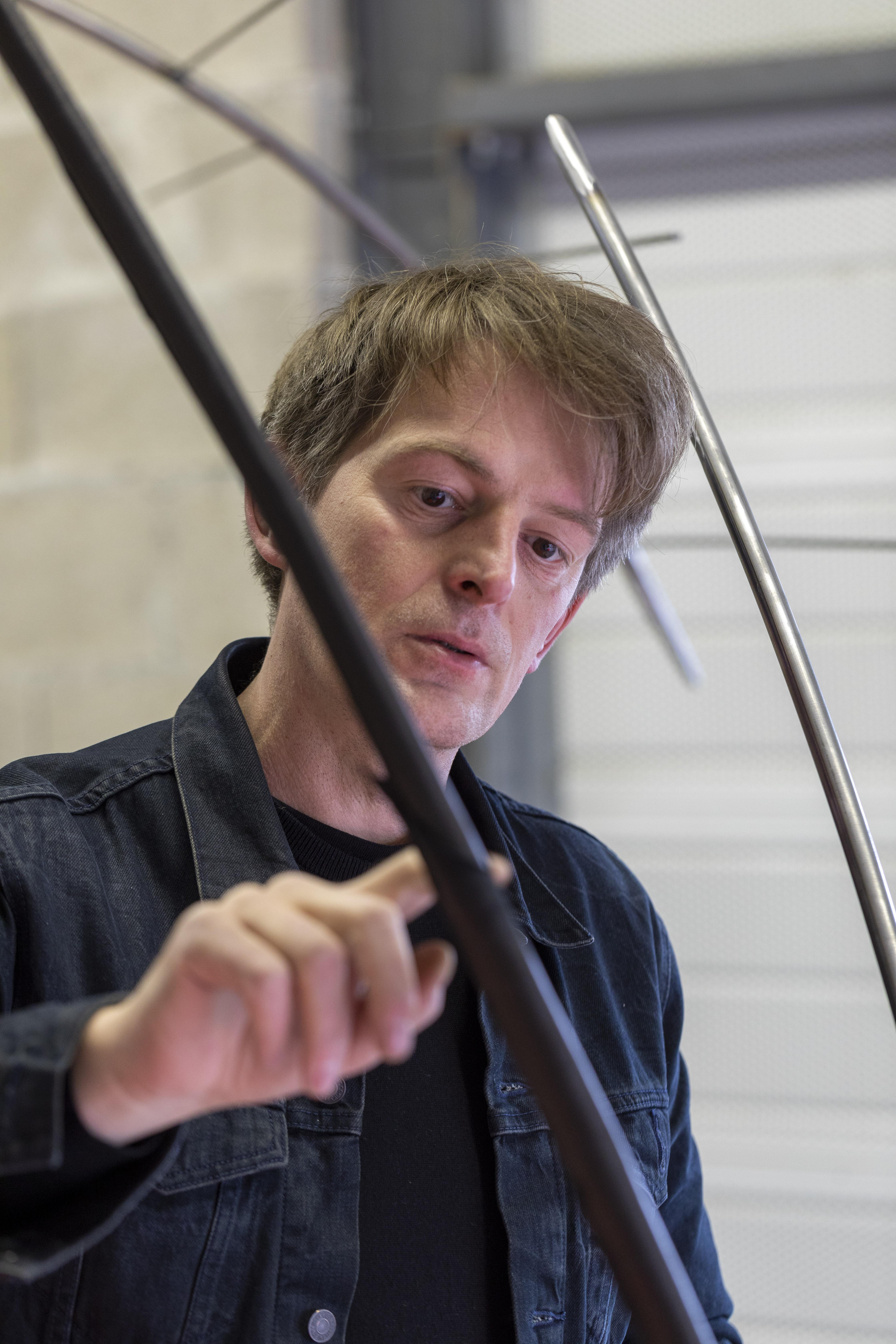 Sébastien Gouju at the Ganterie-Maroquinerie de Saint-Junien © Tadzio
In 2018, artists Sébastien Gouju, Emmanuel Régent and Vassilis Salpistis are residents in Hermès workshops as part of the Foundation’s Artists’ Residencies programme. Three workshops have opened their doors to the selected artists: Sébastien Gouju and Vassilis Salpistis explore leatherwork at Saint-Junien and Val-de-Reuil, while Emmanuel Régent discovers the secrets of crystal at Saint-Louis. Using these singular materials as their starting points, the artists enjoy carte blanche whilst engaging in dialogue with the workshops’ craftspeople.

2018 heralded a new series of the Artists’ Residencies programme that began in 2010. The mentors of this three-year cycle are seasoned artists and also long-term partners of the Foundation: Michel Blazy, Isabelle Cornaro and Françoise Pétrovich.

For this first year of the new series, Françoise Pétrovich chose to mentor Sébastien Gouju (b. 1978, France) whose work – including collage, drawing and sculpture – she has followed for a number of years. Sébastien Gouju is the first artist to take up residency at the Ganterie-Maroquinerie de Saint-Junien, in Limousin, discovering the leatherwork expertise of Hermès craftspeople and incorporating this as-yet untapped material into his artistic vocabulary over the course of his residency from October 2018 to February 2019. Completed with the help of the workshop’s craftspeople, his work, entitled Contre-jour, draws on the collective imagination around leather, blending the worlds of animals and plants in a striking still life that offers a glimpse of a “twilight Garden of Eden”.

The Cristallerie Saint-Louis in Saint-Louis-lès-Bitche welcomes Emmanuel Régent (b. 1973, France), the seventh artist to take up residency at the prestigious site in Moselle. With Michel Blazy as his mentor, Emmanuel Régent explores the unique material of crystal and the exceptional skills of the workshop’s craftspeople.

He began by imagining a mysterious sculpture made up of several elements in blue crystal. Representing a ship stranded in the jagged ice of a frozen sea, the work is an homage to a famous masterpiece by the German Romantic painter Caspar David Friedrich. With the help of the craftspeople, the artist transposed watercolour techniques to crystal to create a series of poetic variations around the motif of clouds.

At the Maroquinerie de Normandie in Val-de-Reuil between June and August 2018, Vassilis Salpistis (b. 1975, Greece) transpose his practice to a hitherto unexplored pictorial surface. Mentored by Isabelle Cornaro, the artist extends the formal and technical diversity of his painting by producing a double-sided work on a single piece of leather. Playing upon the different textures of the surfaces, the variations in painted and natural tones and the interplay between brushstrokes and the veining of the leather, he reveals the physical properties of this unique material. Suspended and shaped by its own weight, Vassilis Salpistis’ sculpture brings to mind the antiforms of Robert Morris.

Disciplines
Visual arts
Craftsmanship
France
Every year since 2010, artists have been invited for residencies in the Hermès workshops.
In 2018, Sébastien Gouju, Emmanuel Régent and Vassilis Salpistis are residents in the Hermès workshops.
In dialogue with craftspeople the artists discover exceptional skills and explore the artistic possibilities of individual materials.

The Cahiers de Résidence #8, co-published by Actes Sud and the Fondation d’entreprise Hermès.