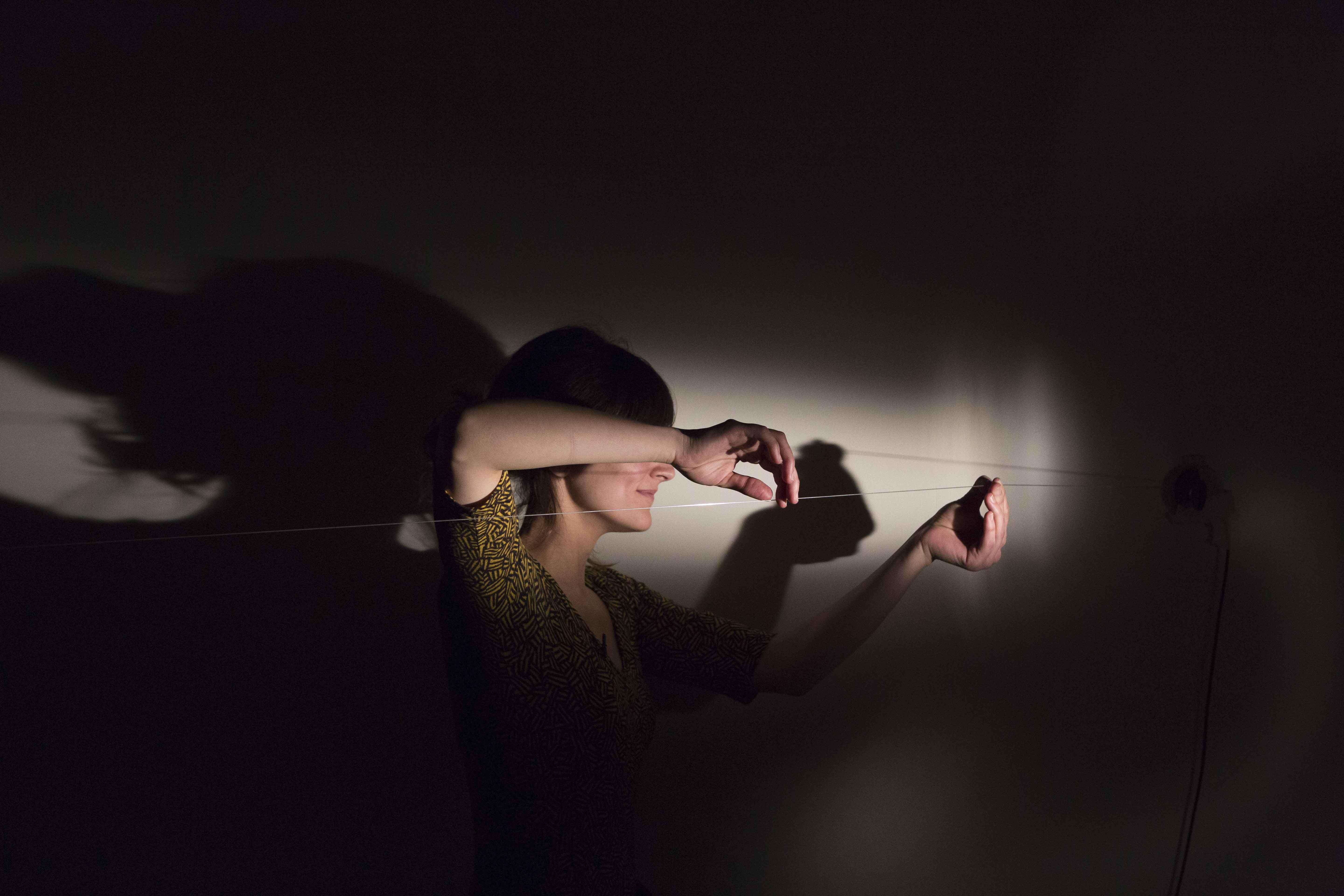 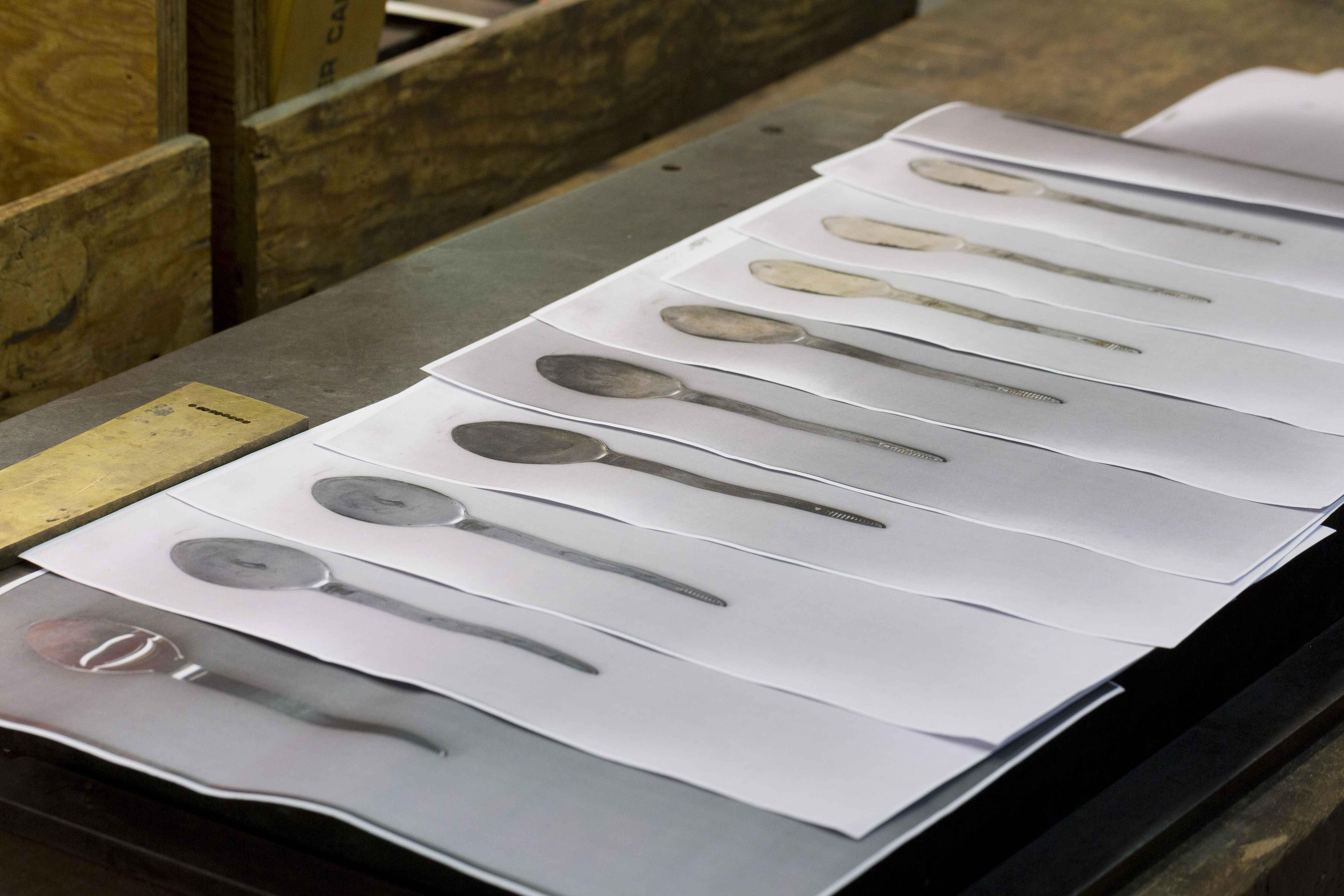 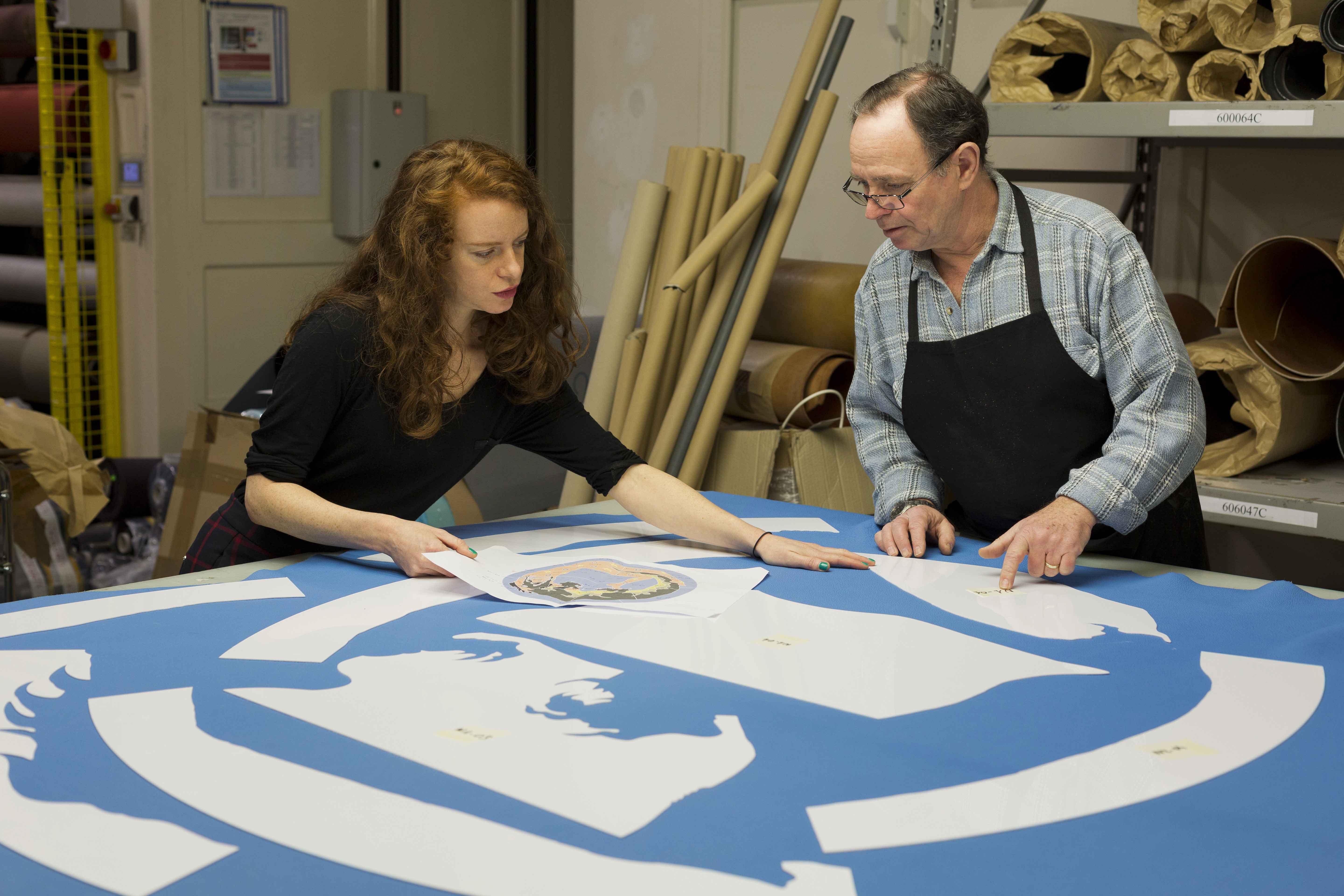 Residency of Lucie Picandet of the Pantin leather workshops © Tadzio
In 2014, Jennifer Vinegar Avery, Clarissa Baumann and Lucie Picandet undertook residencies as part of the Artists’ Residencies programme organised by the Fondation d’entreprise Hermès. Three of the house’s workshops opened their doors to the artists: Jennifer Vinegar Avery discovered a wealth of fabrics at Holding Textile Hermès, while Clarissa Baumann explored the plasticity of silver at Puiforcat, and Lucie Picandet appropriated leather craft at the Ateliers Hermès in Paris and in Pantin. Each artist was given carte blanche to explore these singular materials in dialogue with the workshops’ craftspeople.

2014 was the first year of the second three-year cycle of the Artists’ Residencies programme, which was founded in 2010. The mentors for this cycle were once again seasoned artists with whom the Foundation has enjoyed an active, long-term collaboration: Jean-Michel Alberola, Ann Veronica Janssens and Richard Fishman.

Under the mentorship of Richard Fishman, artist and performer Jennifer Vinegar Avery (b. 1983, United States) took up residency at Holding Textile Hermès in the Lyon area. Continuing her work on dolls and the symbolism of Little Red Riding Hood, Vinegar Avery gave form to an ensemble of fairytale characters. The work that she created, Pupa, Poubelles, Bêtes, embodies her colourful imagination and was the result of an intensive process that entailed the collection, assemblage and sewing of fabric offcuts with the house’s artisans. Blending theatre, fairytale, performance and sculpture, she then staged her creations in an intimate fiction guided by notions of Eros and femininity.

At the workshops of Puiforcat in Pantin, Clarissa Baumann (Brésil, 1988) challenged the gestures and skills of the artisans in order to test the limits of her materials, almost to the point of disappearance. Carrying out her experiments in the workshop under the attentive mentorship of Ann Veronica Janssens, Baumann looked to stretch and work a silver spoon using various techniques. The surprising, minimalist sculpture that resulted from these processes takes the form of a seventeen-metre-long wire, an instrument that resonates with subtle vibrations. Drawing inspiration from the silver dust created by the silversmith’s chisel, Baumann also attempted to design the smallest silver sphere that could be created by human hands. A performance at the close of her residency saw this delicate, barely visible sphere passed from hand to hand… until its disappearance.

At the Ateliers Hermès in Paris and in Pantin, Lucie Picandet (b. 1982, France) engaged with the intricacies of leather craft to create an impressive figurative work. Mentored by Jean-Michel Alberola, she chose a selection of leathers before reworking, resewing and restructuring them into a final assemblage mounted on a circular wooden chassis. The resulting work, Qui me soit chair, boasts dazzling colour fields thanks to the marquetry of various different leathers, and takes inspiration from Ancient Egyptian drawings. Their bodies imbricated in one another, a woman and a crocodile form an Ouroboros that symbolises the infinite and the regeneration of the soul.

Disciplines
Visual arts
Craftsmanship
Lieu
Hermès Workshops
France
Every year since 2010, artists have been invited to undertake residencies in the workshops of the house of Hermès.
In 2014, artists Jennifer Vinegar Avery, Clarissa Baumann and Lucie Picandet were hosted at different Hermès workshops.
Through dialogue with Hermès craftspeople, the artists were able to discover unique skills and explore the possibilities offered by singular materials.

The Cahiers de Résidence #5, co-published by Actes Sud and the Fondation d’entreprise Hermès