Bianca Argimon in residence at the Holding Textile Hermès © Tadzio 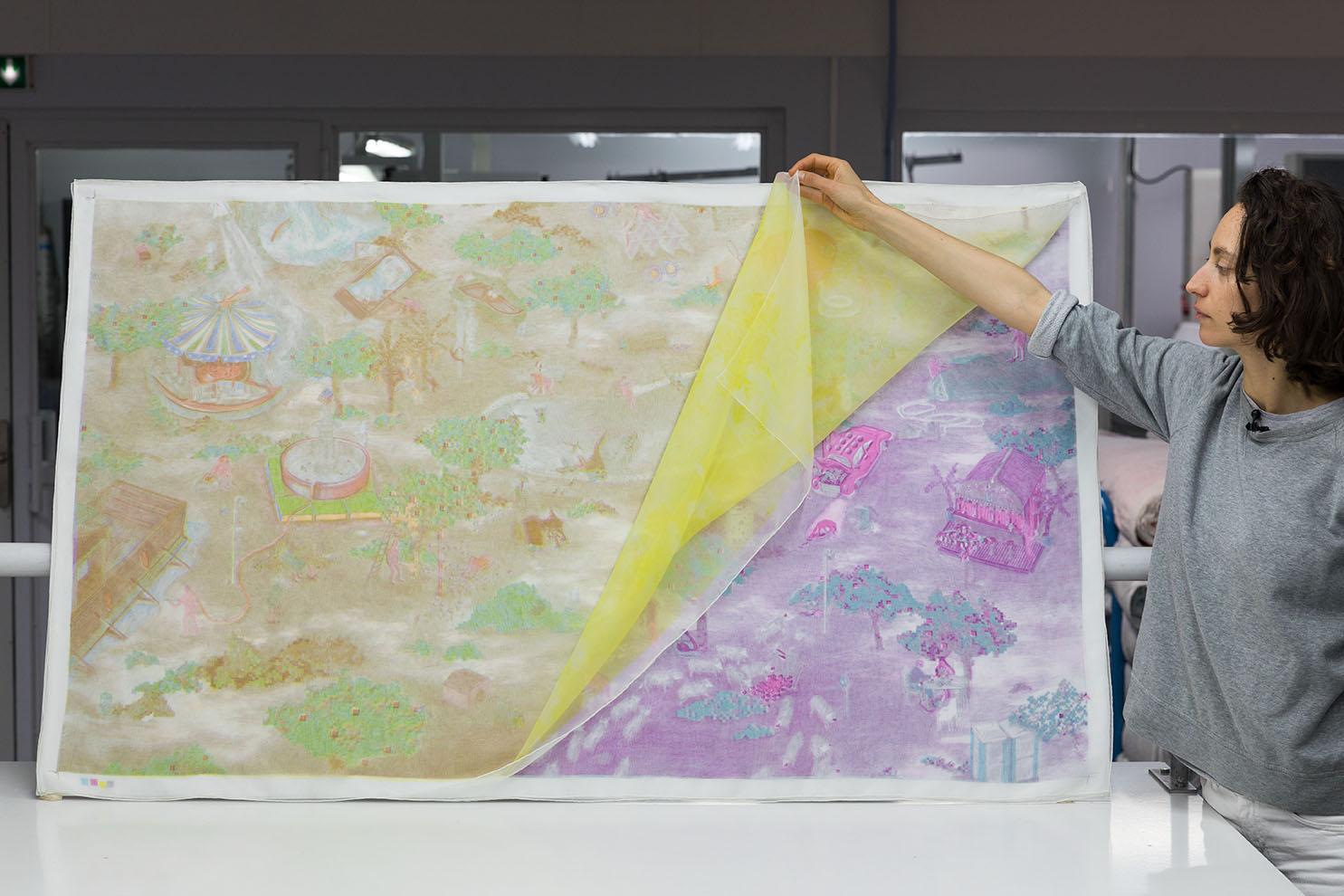 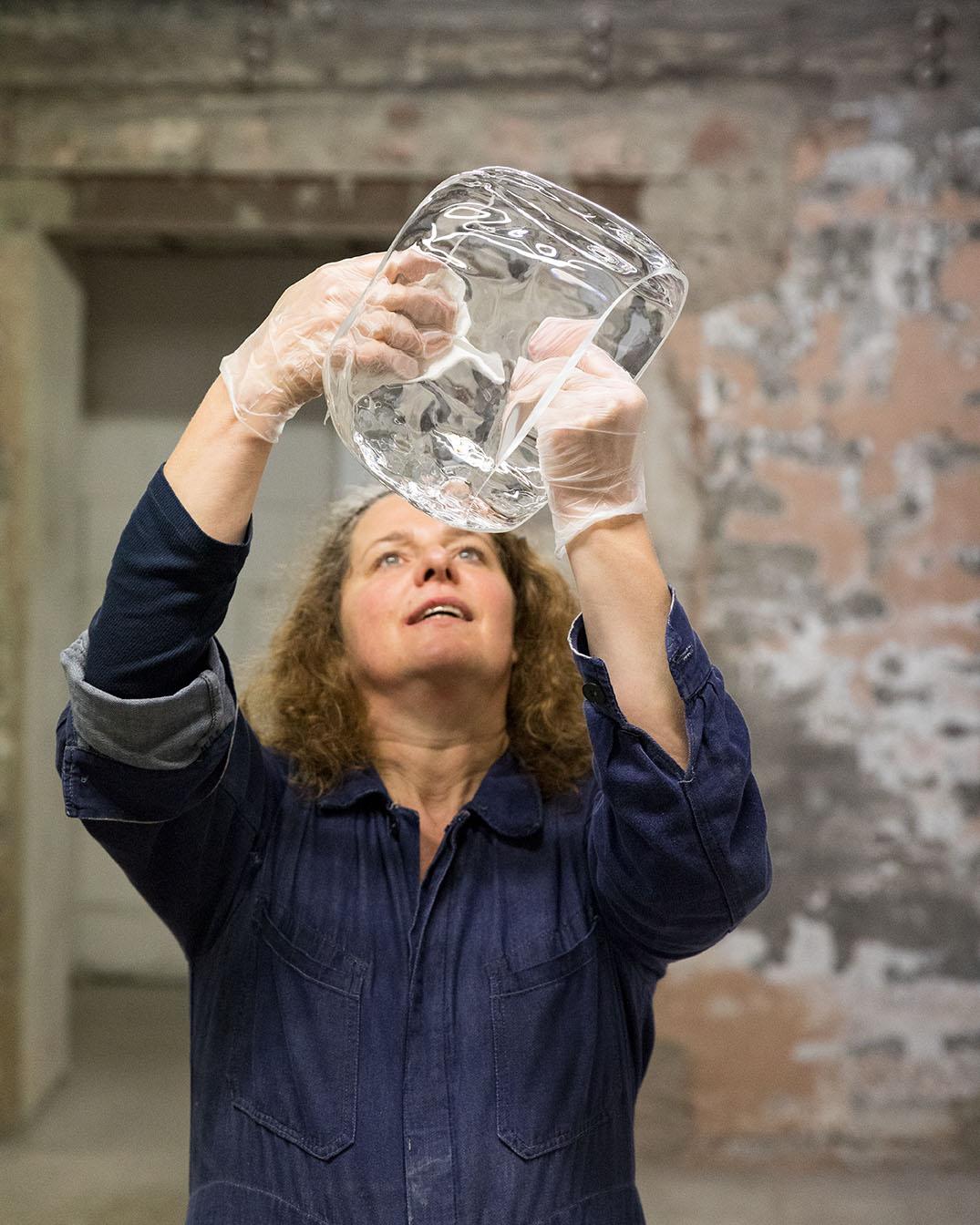 Lucia Bru in residence at the cristallerie Saint-Louis © Tadzio 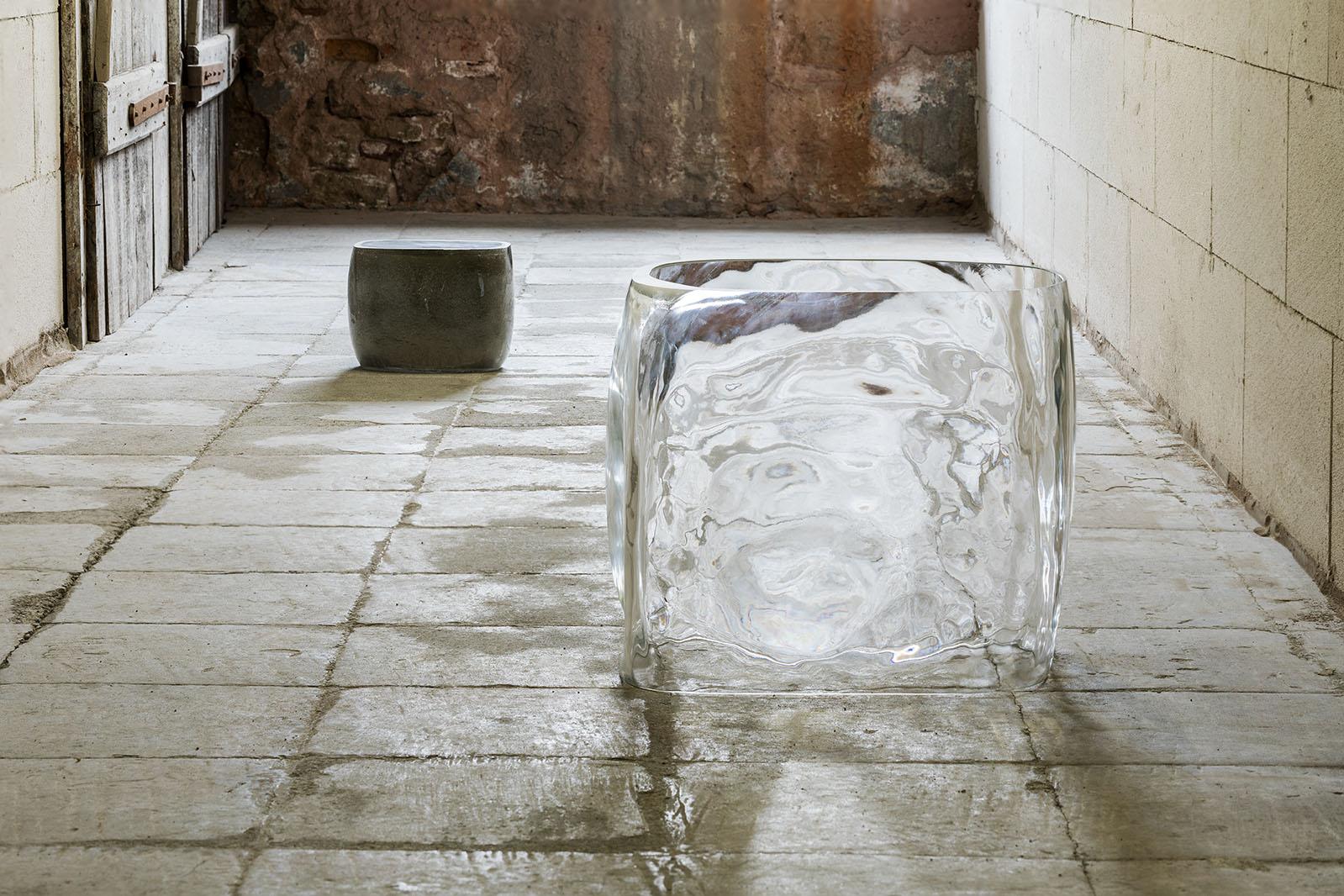 "(aérocubes)", work of Lucia Bru exhibited in the framework of her residency at the cristallerie Saint-Louis © Tadzio "(movidas)", work of Lucia Bru exhibited in the framework of her residency at the cristallerie Saint-Louis © Tadzio Silk paper molds of the "channel opener" and the "channel closer" during the residency of Anastasia Douka © Tadzio
Video of Anastasia Douka's residency
In 2016, Bianca Argimon, Lucia Bru and Anastasia Douka undertook residencies as part of the Artists’ Residencies programme organised by the Fondation d’entreprise Hermès. Three of the house’s workshops opened their doors to the artists: Bianca Argimon discovered the skills associated with silk at Holding Textile Hermès, Anastasia Douka studied leatherwork at John Lobb and Lucia Bru worked with crystal at the Cristallerie Saint-Louis. Each artist was given carte blanche to explore these singular materials in dialogue with the workshops’ craftspeople.

In 2016 the second cycle of the Artists’ Residencies programme, which was founded in 2010, draws to a close. The mentors of this three-year cycle are seasoned artists with whom the Foundation has enjoyed an active, long-term collaboration: Jean-Michel Alberola, Ann Veronica Janssens and Richard Fishman.

In her work, Bianca Argimon (b. 1988, Belgium) often seeks “things which reveal the points of contradiction of the contemporary world”. A highly personal take on the Garden of Eden figures among the works that she created during her residency at Holding Textile Hermès near Lyon. Mentored by Jean-Michel Alberola, Argimon explored this theme through a profusion of scenes printed on different kinds of silk. She transferred the methodical deconstruction of forms and colours that she effects in her drawings onto several layers of this precious fabric to lend a mysterious dimension to her lost paradise.

Lucia Bru (b. 1970, Belgium) created a series of works during her residency at the Cristallerie Saint-Louis in Saint-Louis-lès-Bitche as she explored every one of crystal’s multiple dimensions. Acknowledging a certain “love of deformation” in her sculptural practice, Bru – mentored by Ann Veronica Janssens – adapted techniques used for polishing to plunge masses of crystal into vats of acid. These blocks of pure material were then heated and sculpted into dozens of smaller cubes before being sandblasted, polished and mixed with ceramic prisms of a similar size. The result is a powerfully poetic reflection on the physical instability of beings and things.

Prior to her residency at John Lobb (J.L. & Co.) in Northampton, Anastasia Douka (b. 1979, Greece) had no inkling of the rich complexity of skills that go into the production of each pair of English-made leather shoes. Mentored by Richard Fishman, during her residency Douka became interested in both the material and the people who worked with it: she questioned almost one hundred leather craftspeople on their own tastes in shoes in filmed interviews, which together offer a plural portrait of the workshop and the community to which it is home. The artist then drew on the interviews to create a personalised pair of leather shoes for each of the interviewees according to their preferences: a tour de force that would have been impossible without the engagement of the craftspeople and the artist’s unique appropriation of their skills.

Disciplines
Visual arts
Craftsmanship
Lieu
Hermès Workshops
France
Every year since 2010, artists have been invited to undertake residencies in the workshops of the house of Hermès.
In 2016, artists Bianca Argimon, Lucia Bru and Anastasia Douka are hosted at different Hermès workshops.
Through dialogue with the craftspeople, the artists discover unique skills and explore the possibilities offered by particular materials.

The Cahiers de Résidence #7, co-published by Actes Sud and the Fondation d’entreprise Hermès