Simon Boudvin in residency at the Ardennes leather workshops © Tadzio Benoît Piéron in residency at the Holding Textile Hermès © Tadzio 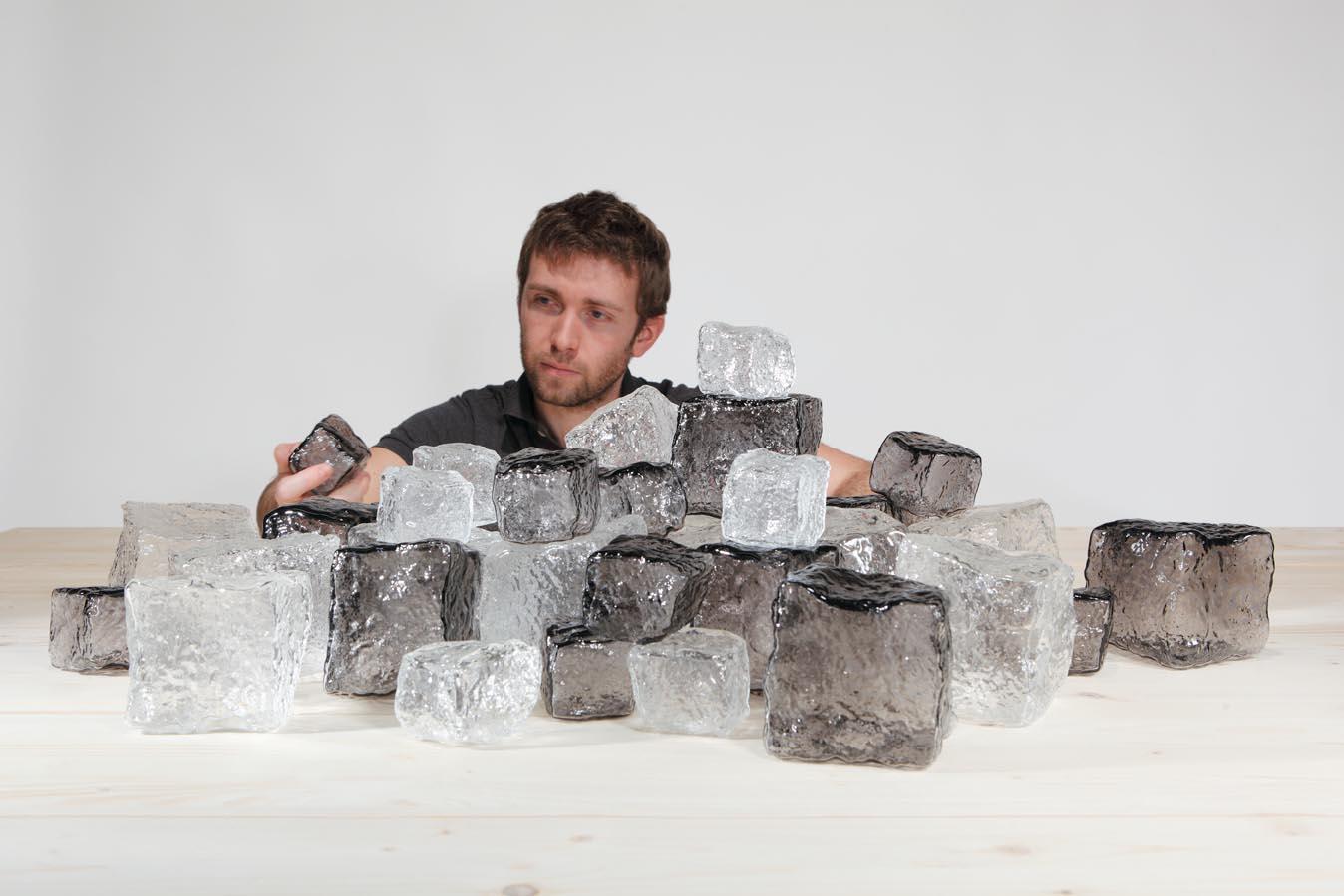 Olivier Sévère in residency at the cristallerie Saint-Louis © Tadzio
2010 saw four artists take up residency in the workshops of the house of Hermès in the first edition of the Foundation’s Artists’ Residencies programme. Olivier Sévère explored crystalware at the Cristallerie Saint-Louis, Benoît Piéron discovered the skills associated with fabrics and textiles at Holding Textile Hermès, and Simon Boudvin and Elisabeth S. Clark immersed themselves in leatherwork at the Maroquinerie des Ardennes and the Maroquinerie de Sayat. Each artist was given carte blanche to explore these singular materials in dialogue with the workshops’ craftspeople.

2010 marked the first year of the inaugural cycle of the Artists’ Residencies programme. The mentors for this first four-year cycle were seasoned artists with whom the Foundation has enjoyed an active, long-term collaboration: Susanna Fritscher, Richard Deacon, Giuseppe Penone and Emmanuel Saulnier.

At the Maroquinerie des Ardennes, Simon Boudvin (b. 1979, France) began his residency with a series of conversations in which he asked each artisan about their training and career. Through these discussions, he learned of the nearby abandoned slate quarries at Rimogne, where he subsequently carried out an archaeological, historical and sociological study and a series of precise topological surveys. At the same time, he researched the forms and the voids created by the leather cutting process at the Maroquinerie. With the help of the workshops’ craftspeople and in dialogue with his mentor Giuseppe Penone, he clad in leather a bespoke desk by a local furniture maker, and rolled the leather offcuts into abstract forms that served as moulds for plaster models.

During his residency at the Cristallerie Saint-Louis in Moselle, Olivier Sévère (b. 1978, France) focused on materials, exploring their qualities, their chemistry and their physical properties. Under the mentorship of Emmanuel Saulnier, he experimented with crystal, drawing upon the various forms devised by artisans over the centuries to produce a work entitled De rien ne se crée rien. Each piece created at the site employs different techniques for working both heated and cooled crystal. By redeploying a number of these, Sévère imagined several collections of “stones”, that variously took on the form of pebbles, slabs, slates and rocks, and reconstructed the perpetual material cycles at the origin of crystal: rocks erode and wear down into sand, which becomes the raw material for the crystal that Sévère in turn reworks into his “stones”.

Upon her arrival at the Maroquinerie de Sayat in the Auvergne region, Elisabeth S. Clark (b. 1983, England) was immediately struck by the unique range of gestures used by the workshop’s artisans. To her, they resembled a form of dance, and she was particularly fascinated by a circular movement used in saddle stitching. This gesture inspired her to create a work consisting of a wooden circle, four metres in diameter, that she clad in white leather. Installed in an upright position in the workshop, it formed a backdrop to the scenes which play out there every day, a simple line directing the viewer’s gaze. The work thus draws attention to the painstaking dexterity that guides each movement of the craftspeople: a gesture that reveals a gesture.

Benoît Piéron (b. 1983, France) experimented with the skills surrounding silk at the Holding Textile Hermès in the Lyon region. Piéron, who was mentored by Richard Deacon, devised a mobile installation that consists of a bed of silk and which he describes as “a medium for dreams and a space for staging the drama of marriage”. He drew inspiration form the Holding’s archives of sheets and wall hangings, as well as from ethnological research into fabrics associated with matrimonial ceremonies in various different cultures. Bed and its silken sheets were created with the help of colour specialists and graphic designers from two other businesses present at the site, Sport Soie and the Société d’Impression sur Étoffe du Grand Lemps (SIEGL).

Disciplines
Visual arts
Craftsmanship
France
In 2010, the Foundation began its programme of Artists’ Residencies in the workshops of the house of Hermès.
The first artists in residence were Simon Boudvin, Elisabeth S. Clark, Benoît Piéron and Olivier Sévère.
Through dialogue with the house’s craftspeople, the artists were able to discover unique skills and explore the possibilities offered by singular materials.