Oliver Beer in residency at the cristallerie Saint-Louis © Tadzio Oh You Kyeong in residency at the Puiforcat workshops © Tadzio 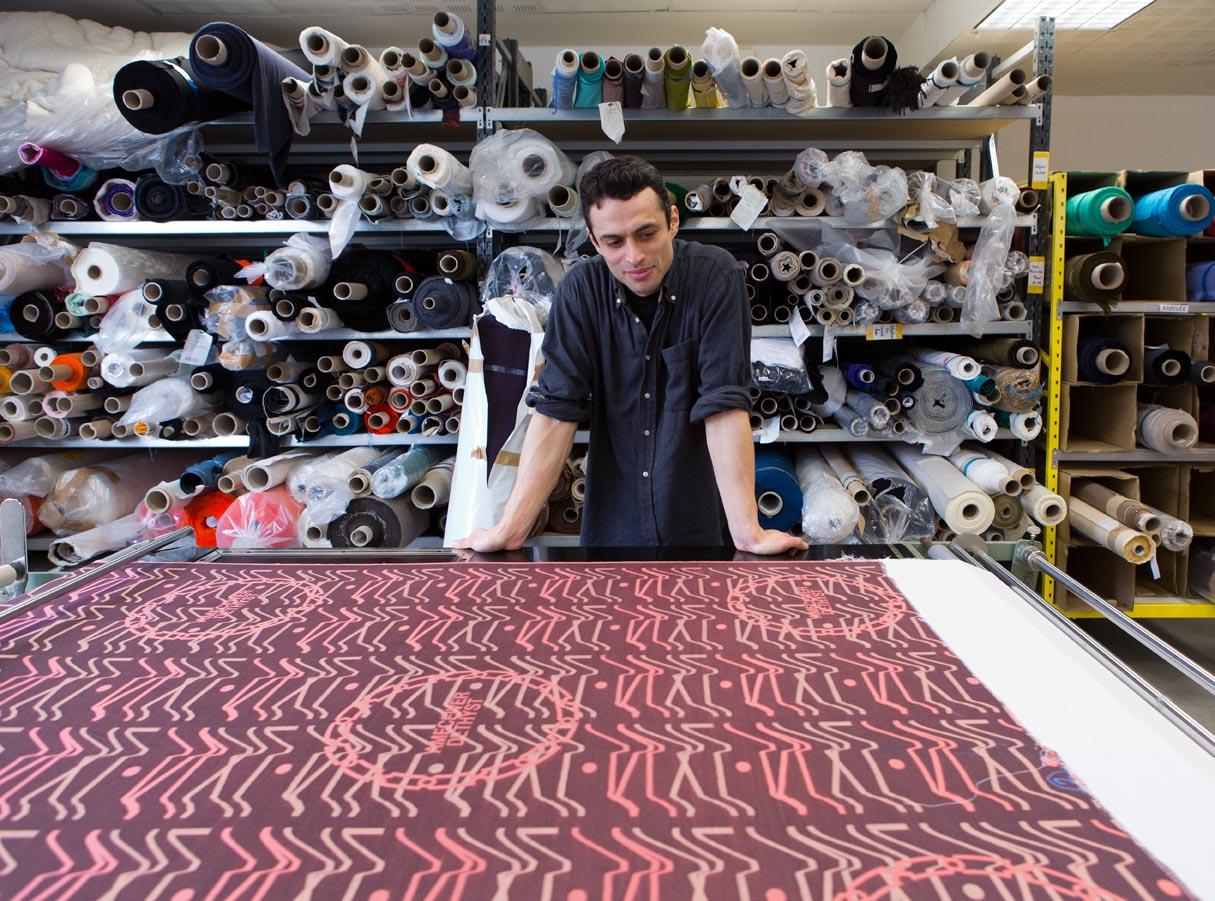 Andrés Ramirez in residency at the Holding Textile Hermès © Tadzio
Video of Oliver Beer's residency at the cristallerie Saint-Louis
In 2012, four artists undertook residencies at the house’s workshops as part of the Artists’ Residencies programme organised by the Foundation. Oliver Beer explored crystal at the Cristallerie Saint-Louis, while Oh You Kyeong worked on silver at Puiforcat. Félix Pinquier discovered the skills associated with leather at the Maroquinerie de Belley, and Andrés Ramirez experimented with silk printing at the Ateliers AS in Pierre-Bénite. Each artist was given carte blanche to explore these singular materials in dialogue with the workshops’ craftspeople.

2012 was the third year of the first cycle of the Artists’ Residencies programme, which was founded in 2010. The mentors for this cycle were seasoned artists with whom the Foundation has enjoyed an active, long-term collaboration: Susanna Fritscher, Richard Deacon, Giuseppe Penone and Emmanuel Saulnier.

At Saint-Louis-lès-Bitche in Moselle, Oliver Beer (b. 1985, England) integrated the precious expertise of the artisans of the Cristallerie Saint-Louis into his own artistic research into the spacialisation of sound. Under the mentorship of Susanna Fritscher, he created several works including Outside-In, a crystal window pane in the form of an acoustic funnel.  Like a shell placed next to an ear, this “window sculpture” opens onto the outside world. Reinventing one of the Cristallerie’s most iconic products, Oliver Beer also imagined three paperweights entitled Silence is Golden. Each crystal block encloses a full-scale model of the three bones of the inner ear, here rendered in gold and fixed in perfect silence.

Oh You Kyeong (b. 1980, South Korea) used her time at Puiforcat to explore the multifaceted skills associated with silverwork. Adding techniques such as locking, turning and brightening to her artistic vocabulary, she developed a work that blended eastern and western cultures. Under the mentorship of Giuseppe Penone and drawing on the painstaking work of the artisans, she created a range of geometric forms and volumes in silver-plated metals which can be assembled into six pagodas. These Moon Pagodas are charged with a heavy spiritual symbolism and reference both Buddhist religious architecture and the cultural objects created by Jean Puiforcat in the early 20th century.

Félix Pinquier (b. 1983, France) discovered leatherwork alongside the artisans of the Maroquinerie de Belley in the Ain department. Both an artist and a trumpet-player, Pinquier continued his research on the transformation of acoustic and visual phenomena into sculpture under the mentorship of Richard Deacon. Evoking sound yet perfectly silent, his work Station consists of eleven steel frames around which ten leather ribbons are wrapped and stretched. The result is an imposing sculpture that resembles a huge set of bellows and offers a graphic representation of a sound wave. A fourth, mental dimension is activated in the minds of viewers and resonates noiselessly as they encounter Pinquier’s work.

Mentored by Emmanuel Saulnier, Andrés Ramirez (b. 1981, Columbia) carried out his residency at the Holding Textile Hermès in Pierre-Bénite, near Lyon. Drawing in particular on the silk-printing and dye-making skills present at the Ateliers AS, Ramirez created Lost in Love, a series of images that reflects his fascination with contemporary symbolism through collages of graphic elements drawn from visual communication. Described as a “kit for contemporary love”, his work offers a permanently evolving landscape less concerned with final results than with the processes involved in its completion.

Disciplines
Visual arts
Craftsmanship
France
Every year since 2010, artists have been invited to undertake residencies in the workshops of the house of Hermès.
In 2012, artists Oliver Beer, Oh You Kyeong, Félix Pinquier and Andrés Ramirez were hosted at different Hermès workshops.
Through dialogue with Hermès craftspeople, the artists were able to discover unique skills and explore the possibilities offered by singular materials.