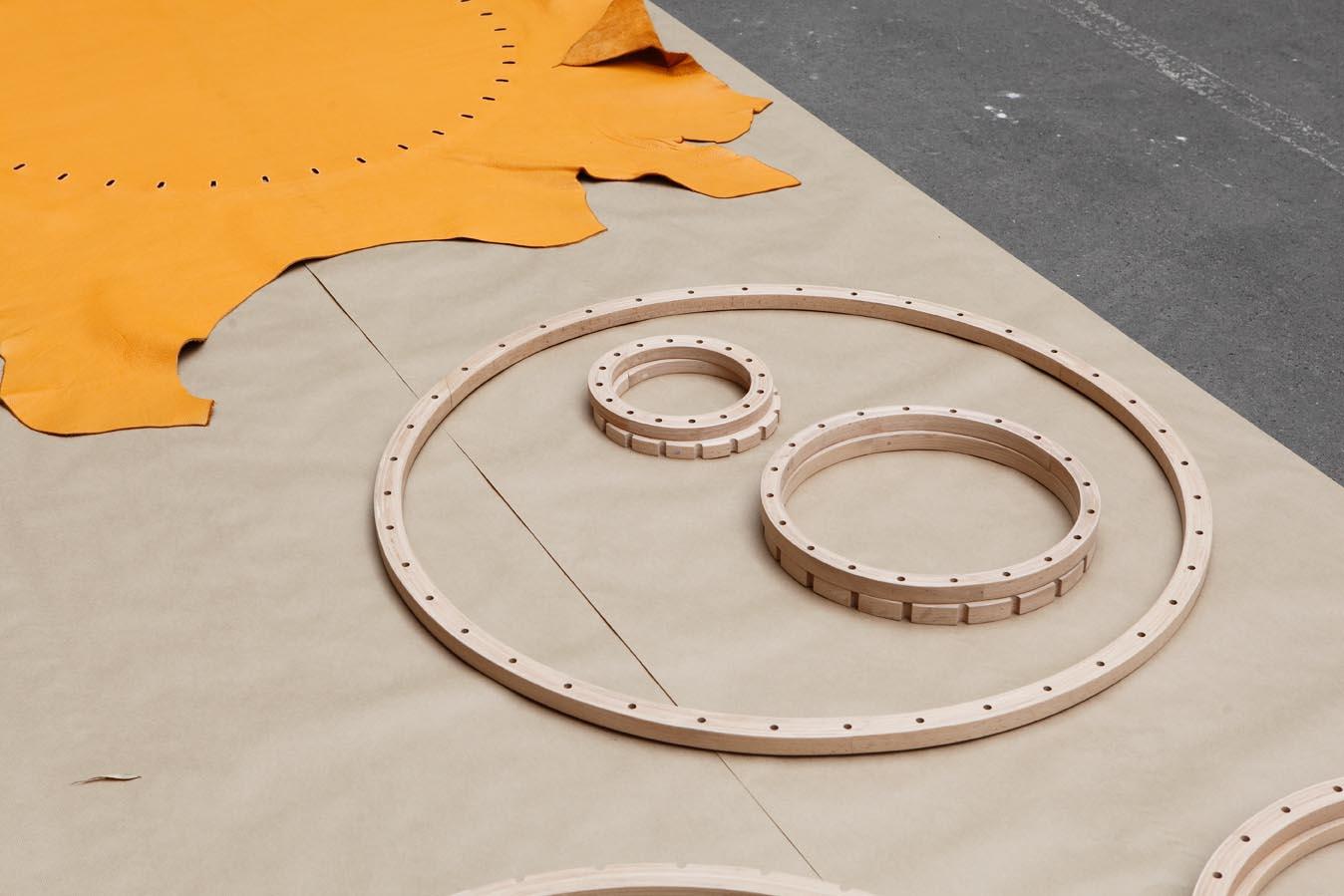 Sébastien Gschwind in residency at the Saint-Antoine leather workshops © Tadzio 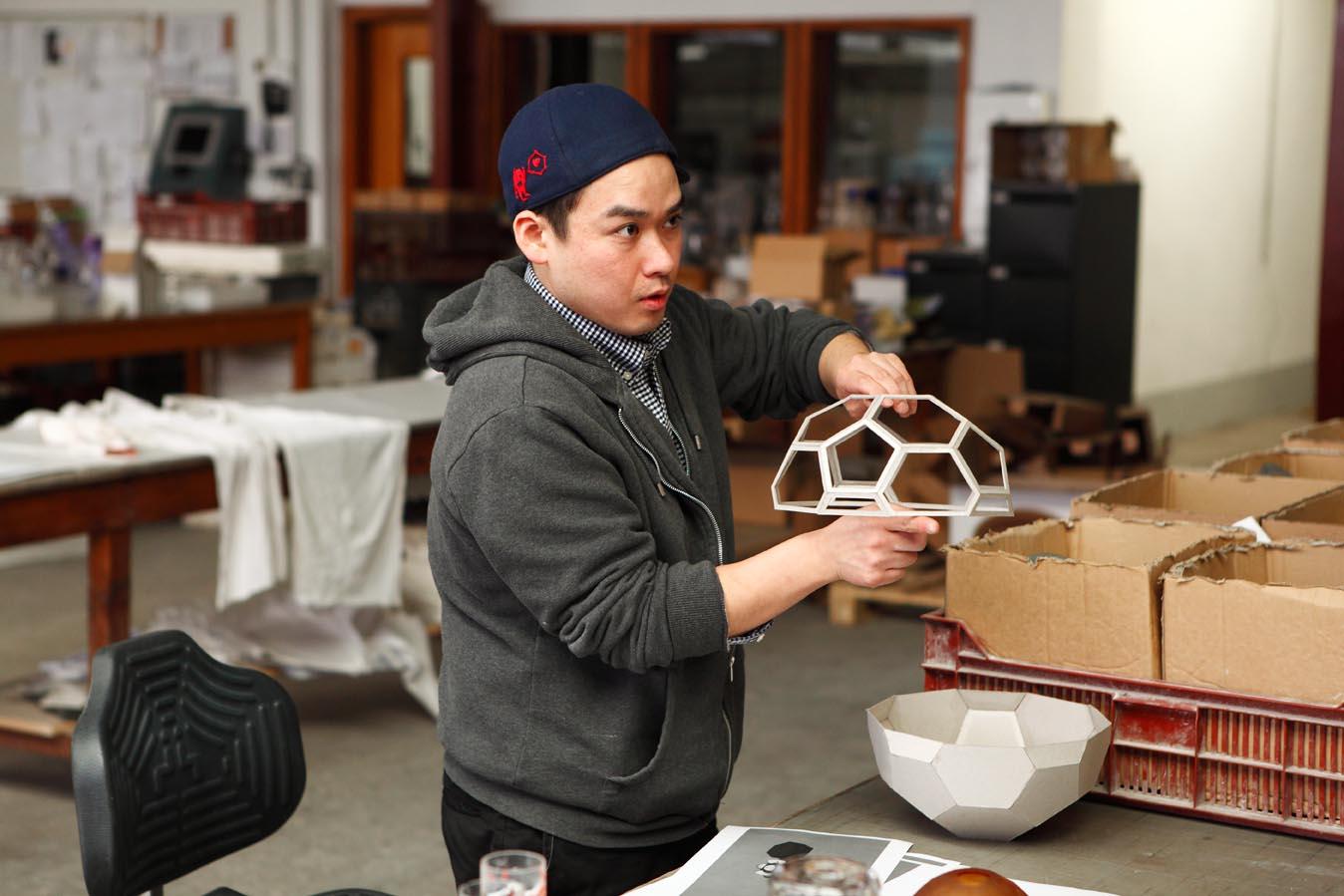 "Instrument pour Saint-Louis", work created by Atsunobu Kohira during his residency at the cristallerie Saint-Louis © Tadzio "Reliefs de table", work created by Marine Class during her residency at the Puiforcat workshops © Tadzio 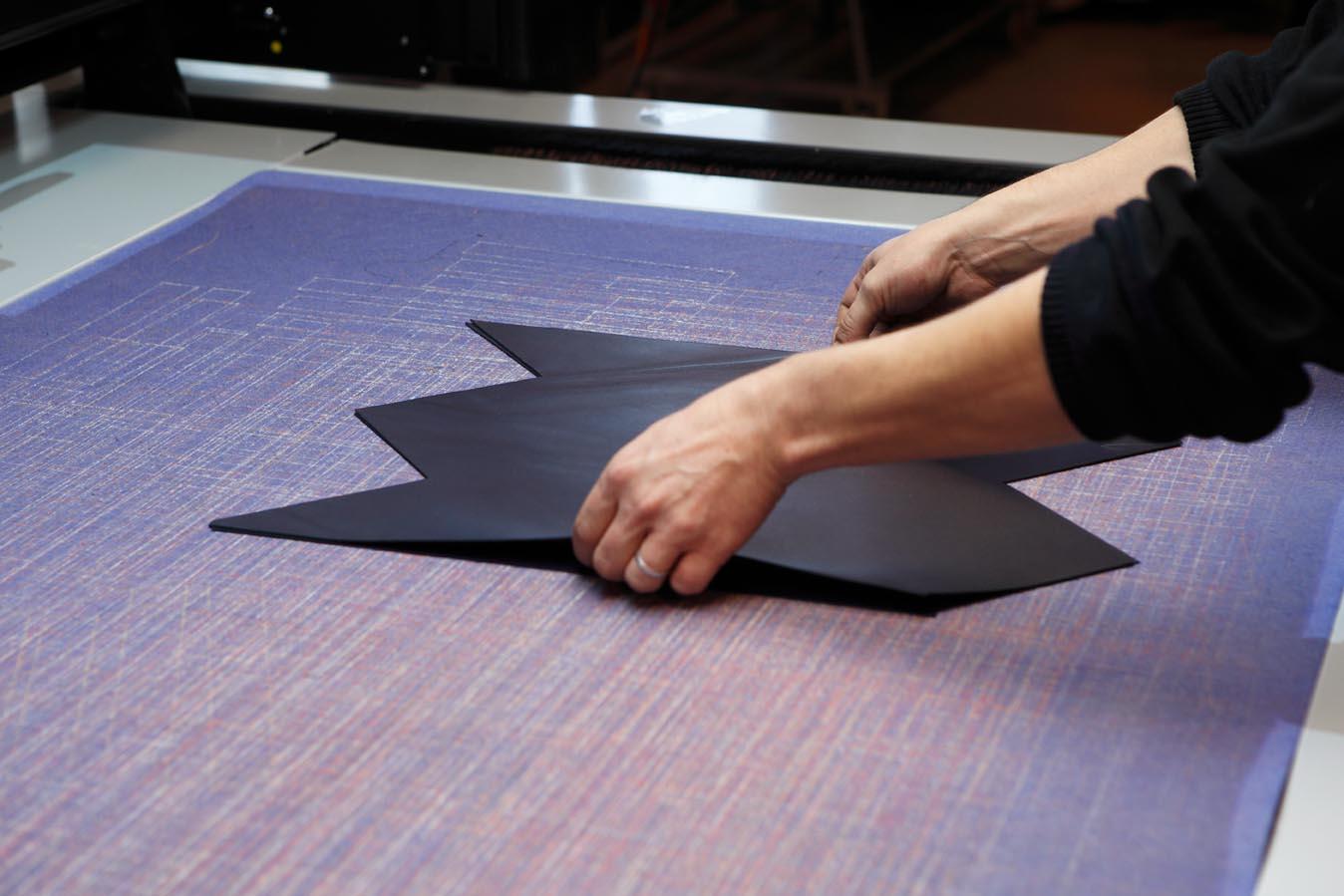 "Giselle", work created by Emilie Pitoiset during her residency at the Pierre-Bénite leather workshops © Tadzio
Vidéo of Sébastien Gschwind during his residency at the Saint-Antoine leather workshops
In 2011, four artists undertook residencies at the house’s workshops as part of the Artists’ Residencies programme organised by the Foundation. Atsunobu Kohira explored crystal at the Cristallerie Saint-Louis, while Marine Class discovered the techniques of the silversmiths at Puiforcat, and Sébastien Gschwind and Émilie Pitoiset immersed themselves in the skills of leatherwork at the workshops at Saint-Antoine and Pierre-Bénite. Each artist was given carte blanche to explore these singular materials in dialogue with the workshops’ craftspeople.

2011 was the second year of the first cycle of the Artists’ Residencies programme, which was founded in 2010. The mentors for this cycle were seasoned artists with whom the Foundation has enjoyed an active, long-term collaboration: Susanna Fritscher, Richard Deacon, Giuseppe Penone and Emmanuel Saulnier.

During her residency at Puiforcat in the Paris region, Marine Class (b. 1983, France) drew inspiration from Art Deco pieces in the collection of Jean Puiforcat, as well as researching the history of tableware. With the help of craftspeople and in dialogue with her mentor Richard Deacon, she cut, resized and soldered together a series of brass plates before beating and folding them to form new shapes which were then silver plated. The result is Reliefs de table, a hybrid still-life piece that brings together quotidian domestic activities and fantastical creativity: on a tablecloth bearing a nautical map of Canada lies a ship stranded between two reefs.

Sébastien Gschwind (b. 1973, France) immersed himself in the skills of the craftspeople of the Maroquinerie de Saint-Antoine in Paris. Mentored by Emmanuel Saulnier, Gschwind designed and produced the work Un genre humain: four modules of increasing size resembling drums or cages are punctuated by intact animal skins fixed onto the circular structure. The work can be installed in three different combinations: folded in on itself, opened up horizontally, or stood upright. In its vertical position, Gschwind’s sculpture references both The Town Musicians of Bremen, a story by the brothers Grimm, and Vladimir Tatlin’s Monument to the Third International, with the solidarity of the animals in the fairytale resonating with the utopias of architecture.

Under the mentorship of Giuseppe Penone, Atsunobu Kohira (b. 1979, Japan) sought to pay tribute to the rich history of the Cristallerie Saint-Louis in Moselle through his Instrument pour Saint-Louis, a sculpture made up of two geodesic hemispheres that he created over the course of his residency at the site. Kohira’s hemispheres enclose a clock mechanism whose needles scratch the interior surface of the upper element, etching out a trace of time’s passage. Every sixty seconds, the sound of this engraving process is punctuated by a stronger, clearer sound that carves a notch into the crystal. The work results from the synthesis of a range of techniques including the shaping of both hot and cool crystal, and showcases the singular acoustic properties of this unique material.

In residency at the Maroquinerie de Pierre-Bénite in the Lyon area, Émilie Pitoiset (b. 1980, France) discovered the wealth of leatherwork skills present across the site’s various workshops. Drawing on the expertise of the Maroquinerie’s craftspeople and the guidance of her mentor Susanna Fritscher, Pitoiset created a theatre curtain in black lambskin, romantically entitled Giselle. The work is made up of fifty identical pieces, each of which was folded by hand before being weighted down with a particular kind of stone that imprinted a pattern upon the soft leather. It confronts the viewer in an indeterminate encounter that suggests at once a performance to come and a final curtain.

Disciplines
Visual arts
Craftsmanship
France
Every year since 2010, artists have been invited to undertake residencies in the workshops of the house of Hermès.
In 2011, Marine Class, Sébastien Gschwind, Atsunobu Kohira and Émilie Pitoiset were hosted at different Hermès workshops.
Through dialogue with the house’s craftspeople, the artists were able to discover unique skills and explore the possibilities offered by singular materials.