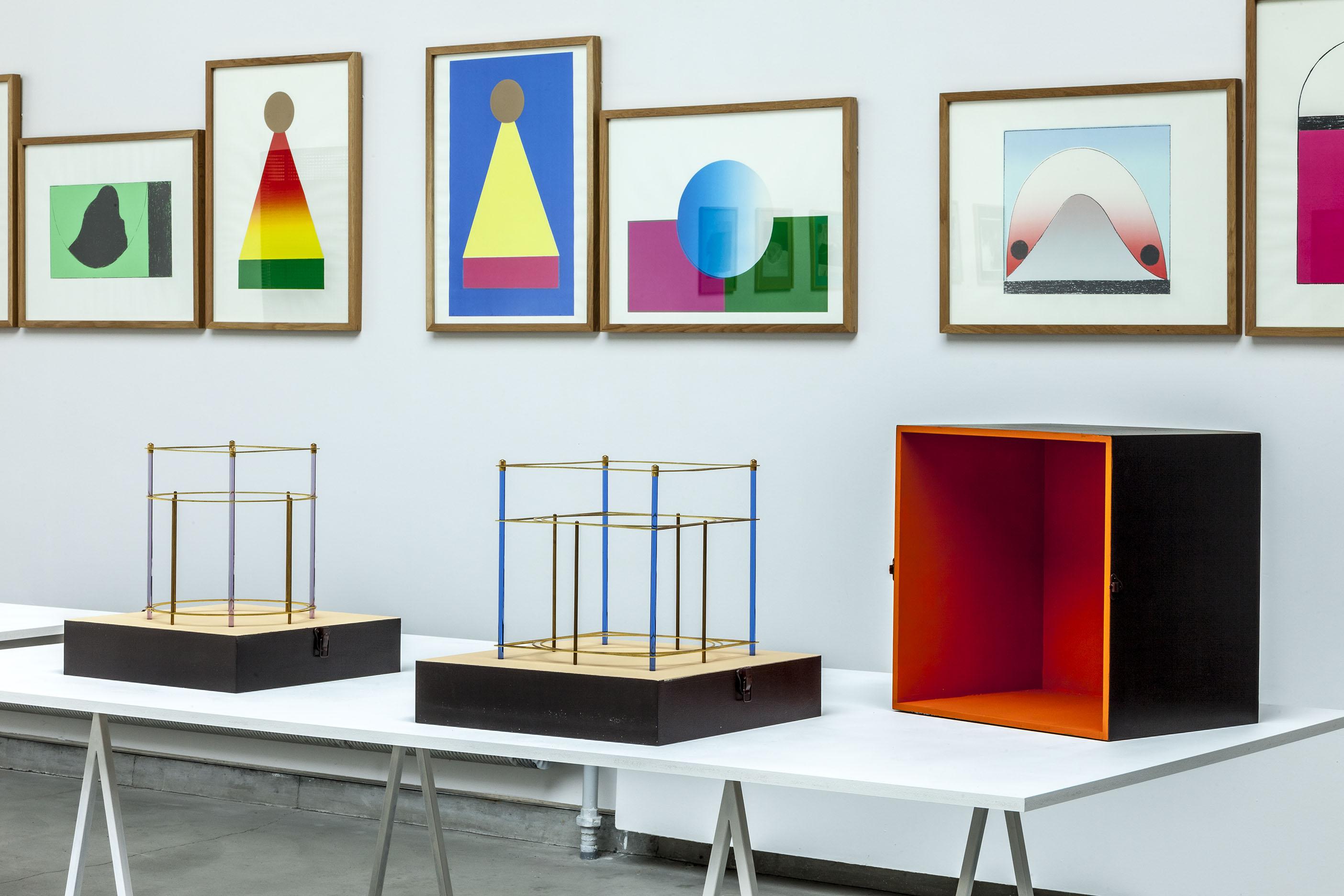 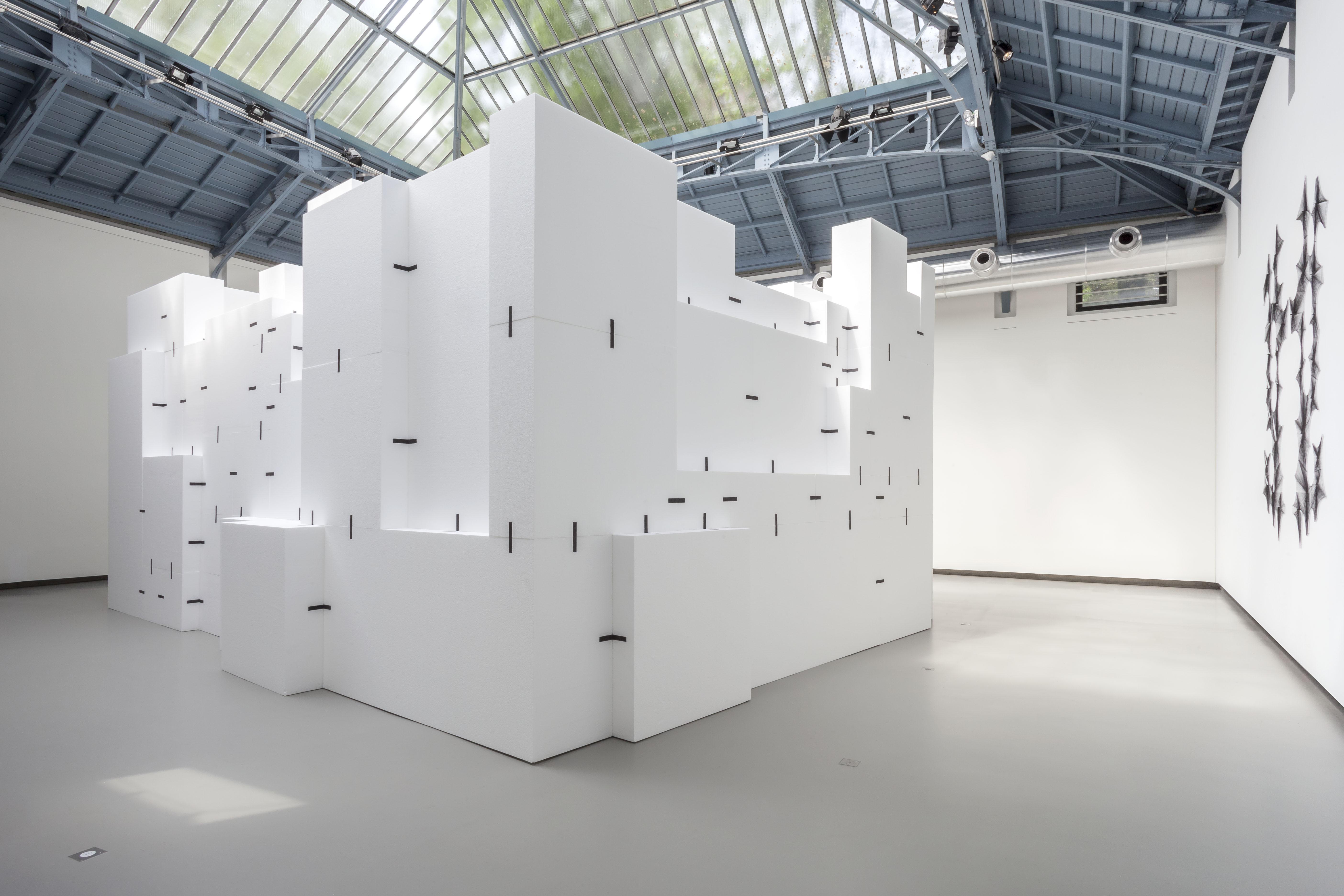 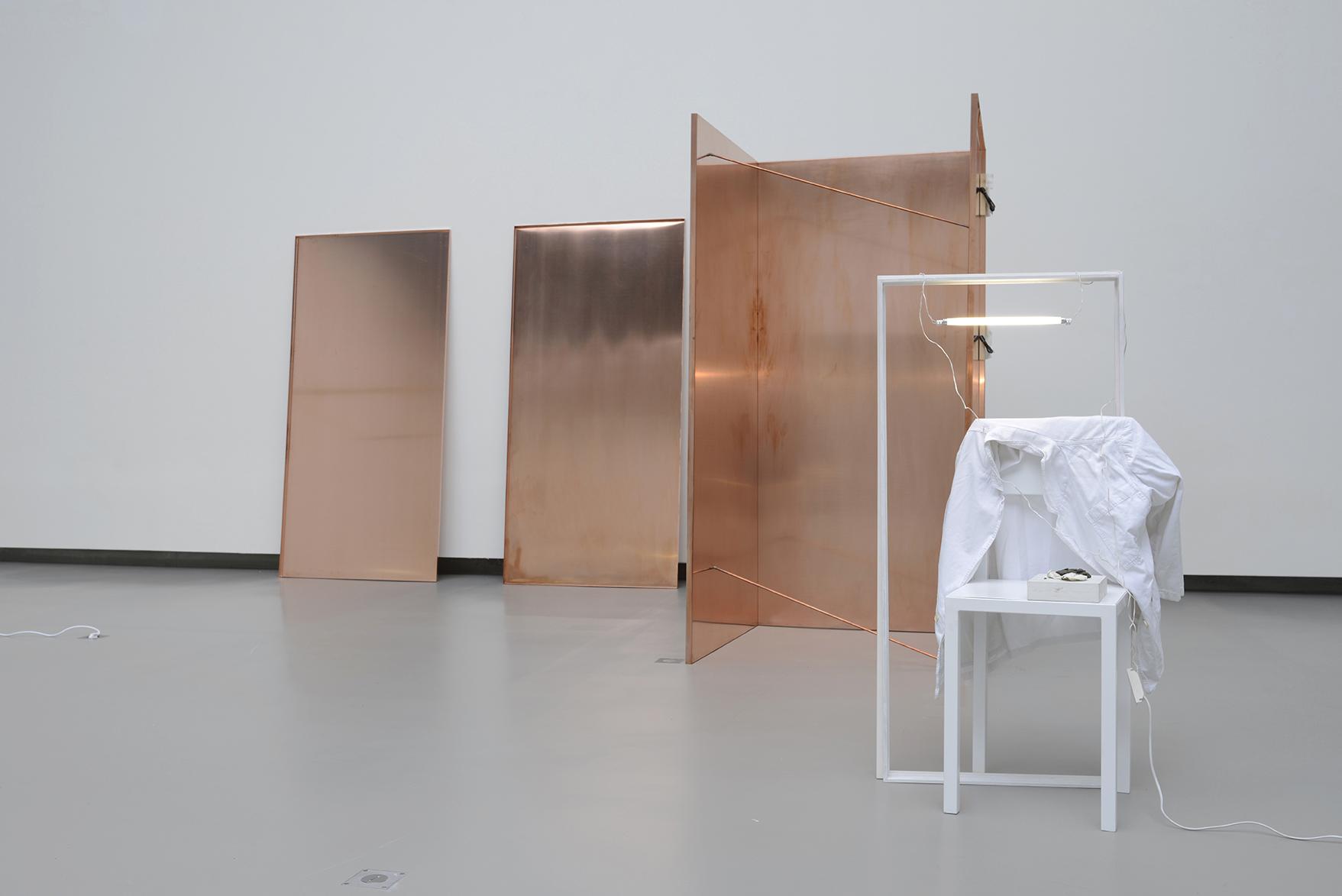 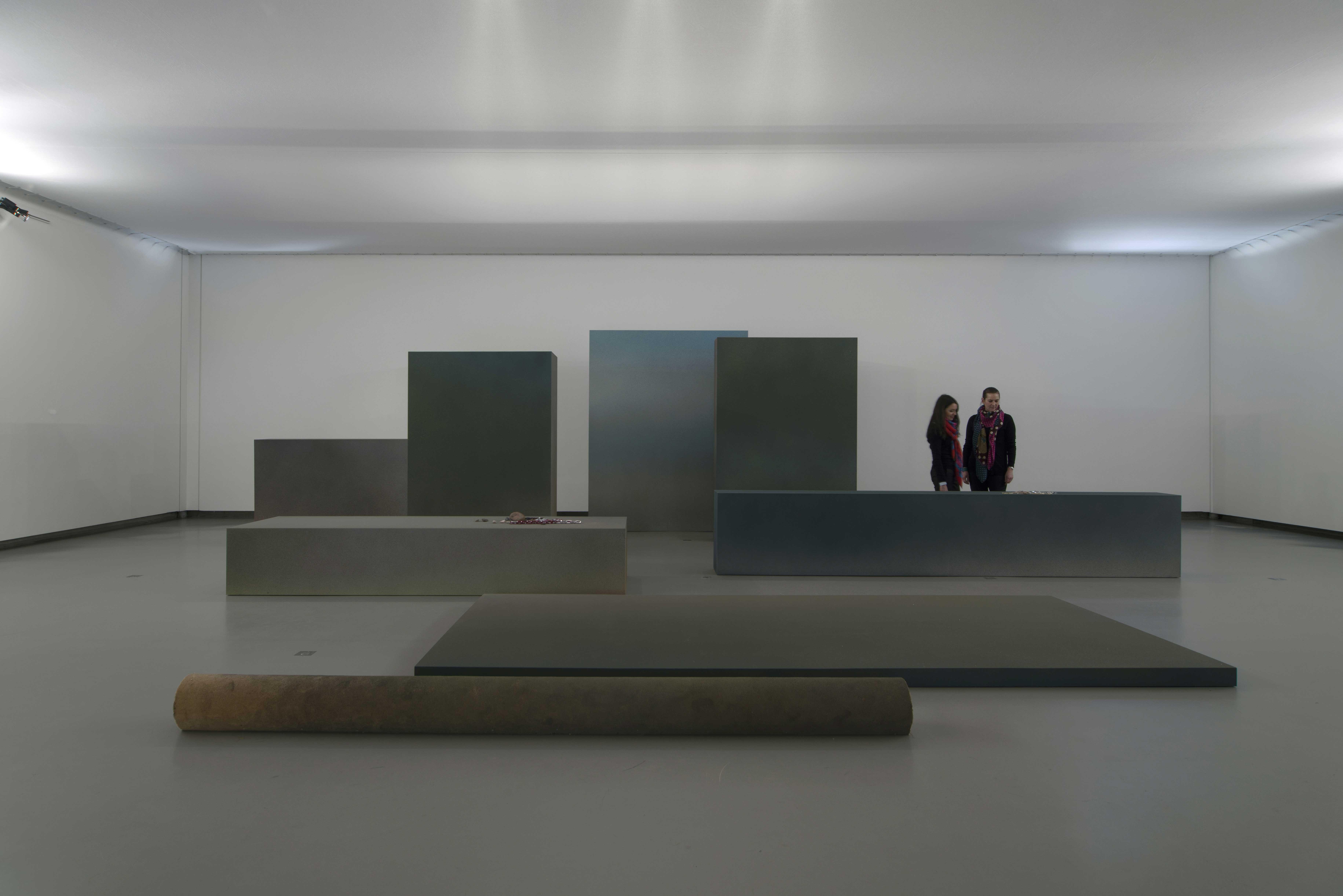 Isabelle Cornaro exhibition © Isabelle Arthuis
Video from the Isabelle Cornaro exhibition
The first exhibition series devised by curator Guillaume Désanges at La Verrière took place between April 2013 and March 2016. From the inaugural exhibition that served as a collective manifesto to the solo exhibitions that followed, the series featured works imbued with productive tensions between form and thought, and between intelligence and technology. These are works in which boundaries between concepts and their realisation, between the mind and the hand, and between gesture and thought are constantly challenged and transgressed.

The inaugural exhibition of the series drew inspiration from the work of Marcel Duchamp and his rogue craftsmanship. Duchamp is often seen as a distant, cerebral figure in the collective imagination, a pure mind who stepped back from the labour of making art to dedicate himself to intellectual activities. Yet we know that within the secrecy of his workshop he undertook vast manual projects that required precision, meticulousness and hard work. Around original works by Duchamp, the exhibition brought together pieces by Elias Crespin (b. 1965, Venezuela), Hubert Duprat (b. 1957, France), Hans-Peter Feldmann (b. 1941, Germany), Michel François (b. 1956, Belgium), Ann Veronica Janssens (b. 1956, United Kingdom), Irene Kopelman (b. 1974, Argentina), Corey McCorkle (b. 1969, USA), Benoît Maire (b. 1978, France), Anna Maria Maiolino (b. 1942, Italy) and Francisco Tropa (b. 1968, Portugal). All of them resonated with the idea of a personal economy of craftsmanship revealing a thinker at work.

The first solo exhibition in the series was dedicated to Francisco Tropa, who also presented a work in the inaugural collective exhibition. The forms that Tropa creates maintain a complex relationship with their cultural substrate through a constant back-and-forth. Gesture and thought jostle for position, though one never takes precedence over the other. His material-based practice is thus as intuitive as it is erudite. Entitled “TSAE – Trésors Submergés de l’Ancienne Égypte”, Tropa’s exhibition takes the form of an original installation that brings together various different representations of the world, from the Christian Middle Ages to modernist utopias. The ensemble forms an incomplete sculptural fiction that the visitor is free to reconstruct in their own mind.

For her solo exhibition “Chiral Garden”, Irene Kopelman returned to La Verrière with a specific piece on the theme of chirality. Something is said to be chiral when it offers a perfect mirror image of another object. This is the case for certain cells, plants, shells and mathematical concepts. In a taxonomical approach recalling those of naturalists and biologists from the beginning of the 20th century, Kopelman created a strange garden composed exclusively of chiral objects (plants, fossils, stones) and of her own drawings. Subtle references, in particular in the form of ready-made objects, link this installation to Marcel Duchamp, the figure who inspired the exhibition series “Gestures, and Thought”.

For the fourth offering in the series, Désanges presented an original installation by Hubert Duprat, two of whose works were shown in the inaugural exhibition. Grounded in a demonstrable and concrete connoisseurship, Duprat’s work goes beyond mere observation to encompass acts of appropriation. Mineral, organic and plant elements are blended with synthetic and industrial materials in sculptures at once disturbing and seductive, shaped through minimal, delicate interventions. An artist whose work is both manual and cerebral, Duprat eschews virtuosity and fixed skill sets in favour of the adoption of new techniques to suit each new whim and project. Thus, through his practice, he contests modernity’s inherited categorisations to take up the position of an enlightened amateur or an experimental bricoleur who substitutes curiosity for expertise.

The title of Benoît Marie’s exhibition at La Verrière, “LETRE” plays on the homophony of the French words for “letter” (“letter”) and “being” (“l’être”). His vast installation is composed of different elements that attempt to give form to both thought and sensation. Marie belongs to a generation of artists who explore the metaphysical while paying close attention to form and to objects, and whose attentions have focused less on pure, abstract thought than on its manifestations and accessories, be they books, images or culture. For these artists, knowledge is approached as a material. A number of areas of research are thus articulated in Marie’s ambitious project to give physical form to philosophical concepts. The installation offers an opportunity for a curious and critical exploration of the fundamental gap between art and thought that results from such attempts.

The sixth instalment of the series was dedicated to AGENCE, a collective initiative launched in 1992 by Kobe Matthys (b. 1970, Belgium). The project catalogued public intellectual property and copyright disputes that involved plagiarism, copying, unfair use and fraud. This research project, the only one of its kind in the world, was presented in the form of installations and encounters in which the public was invited to debate each case with experts. For the exhibition at La Verrière, AGENCE conceived an “assemblage” which referenced the central notion of the exhibition series, namely a Duchampian blurring of the boundaries between concepts and their realisation, between the mind and the hand, and between gesture and thought.

After participating in the inaugural exhibition of the series, Ann Veronica Janssens and Michel François were invited to produce an original joint project. Although formally very different, the work of both artists shares a silent and almost subliminal connection. It was this principle of complementarity and productive tension that inspired the exceptional invitation extended to the two artists. Beginning from a dialogue with Désanges, Janssens and François drew up a series of projects to be activated in a specific installation at La Verrière. Entitled “Philaetchouri” in a reference to the recent landing of the “Philae” probe on the “Tchouri” comet, their piece in the central exhibition space drew on industrial materials to activate tensions between weight and lightness, materiality and illusion.

Since the start of the 1980s, Laura Lamiel (b. 1948, France) has constructed a singular body of work marked by notions of the absolute. Entitled “Chambres de capture”, her original installation for the Foundation’s Brussels exhibition space deployed her plastic vocabulary in the form of a landscape of “cells” through which visitors could wander. Found objects and raw materials, offcuts and manufactured objects, furniture and accessories were meticulously arranged into a sensitive and sensual apparatus where empty space also played an important role. Exemplary of Lamiel’s work in its poetically strategic multiplication of layers and perspectives, and in its operations blending exposition with dissimulation in a single gesture, this installation exploded the viewer’s perception and feelings in different and often contradictory directions.

Nil Yalter (b. 1938, Egypt) is a pioneering and highly original artist who follows his own intuition and social and political convictions to create a hybrid body of work. Rooted in a conceptual basis, yet with a strong concern for form and material, his singular work resists canonical definitions of art. His solo exhibition at La Verrière, entitled “1973 / 2015”, featured a collection of work dealing with questions of nomadism and exile, from the emblematic Topak Ev to original work created for the occasion. Bridging spirituality and the major questions of artistic modernity, as well as those of contemporary technology and craftsmanship, Yalter’s art demonstrates just how indissociable an engagement with ideas is from an engagement with form.

“Gestures, and thought” closed with a solo exhibition by Isabelle Cornaro (b. 1974, France). As Désanges emphasised, Cornaro belongs to a generation of artists as keenly interested in knowledge and thought as they are concretely engaged in giving physical form to their learning. Using a range of different techniques, Cornaro produces carefully constructed and meticulously finished works that convey particularly subtle observations on art and its history. For La Verrière, Cornaro conceived in situ a new piece that echoed the topography of the exhibition space. Its geometric structure played out on various levels and expressed her ongoing research into colour, perspective and volume.