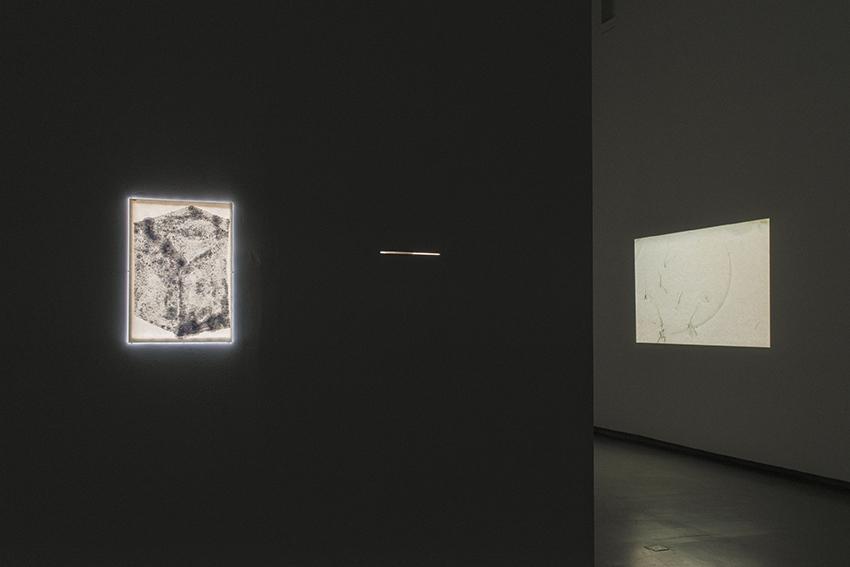 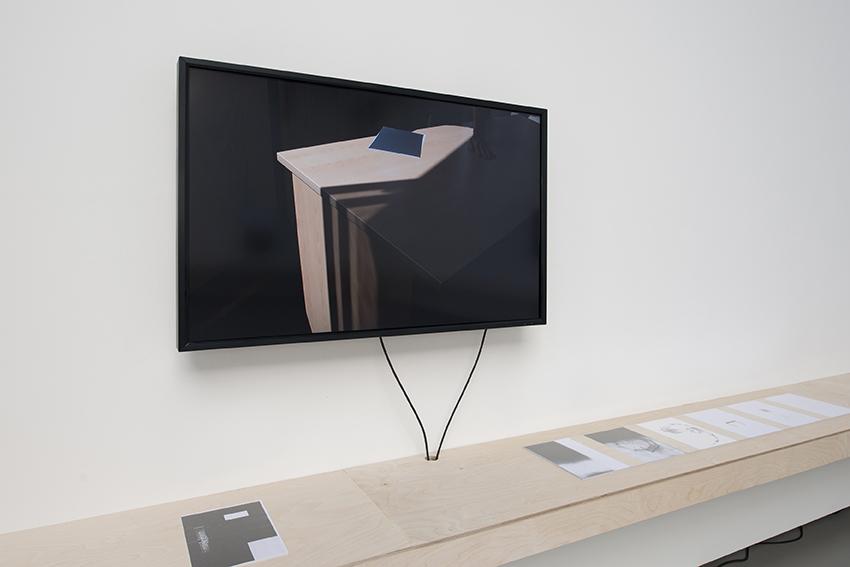 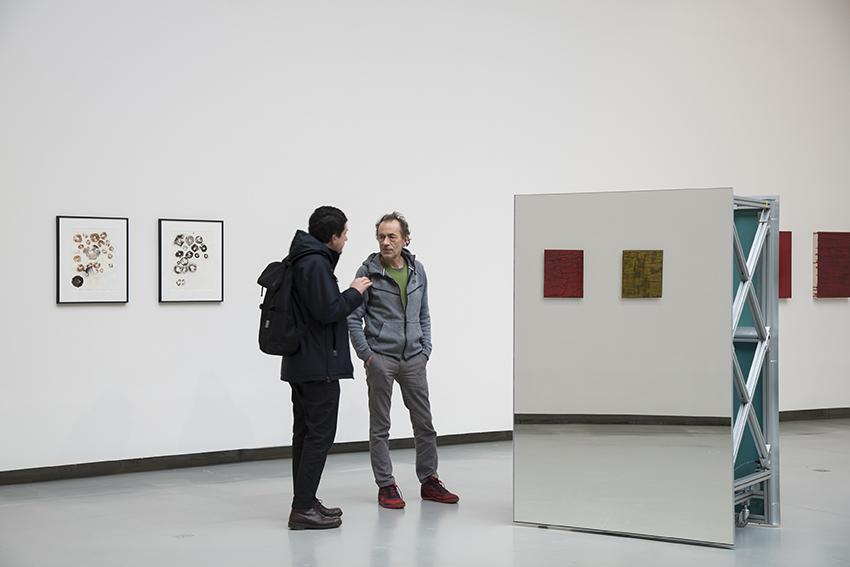 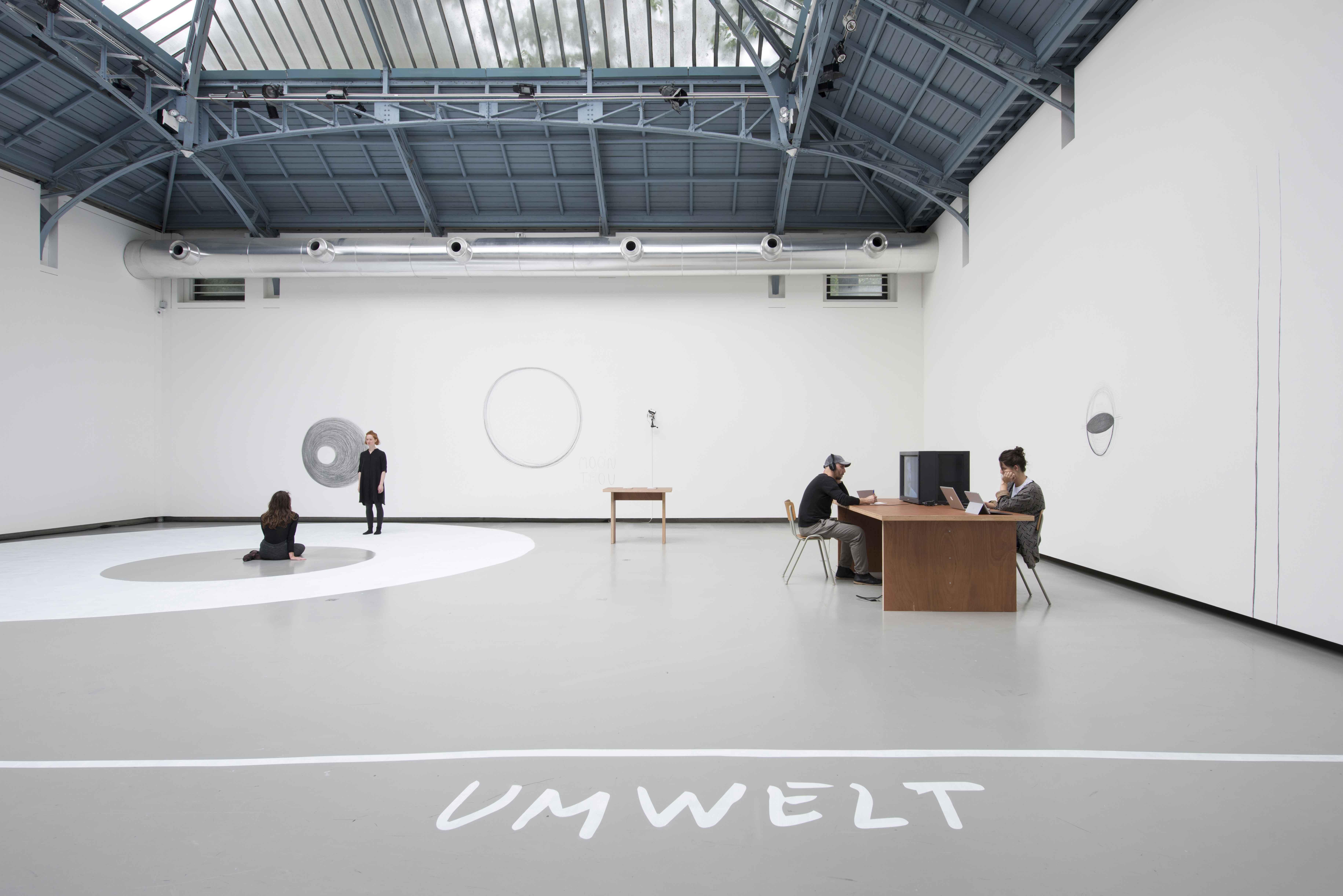 Dora García exhibition "Somewhere, Two Planets Have Been Colliding for Thousands of Years (The Thinker as Poet)" © Isabelle Arthuis

Erwan Mahéo and Douglas Eynon exhibition "NOVELTY Ltd." © Isabelle Arthuis
Begun in 2016, “Poésie balistique” (‘Ballistic Poetry’) is the second chapter in an artistic programme created by Guillaume Désanges at La Verrière. This cycle examines the gap between the rational, pre-determined nature of conceptual art and its eventual results through certain forms of abstraction. The works presented here are based on calculated impacts that we feel more than we understand; their discourses do not hide the sometimes vertiginous abysses of incomprehension, and thus they privilege subjective reception over exhaustive interpretation.

The inaugural exhibition of this series brought together artists belonging to different generations and worlds who share a critical and process-based approach to their mediums. Though their works sometimes escape our comprehension, emotion and feeling emerge precisely at this moment when discourse falters. Within the space, these works were also set in resonance with the words of contemporary poets.

Several of the artists present in this cycle of exhibitions have returned for solo exhibitions as part of the same cycle. An exhibition by Hessie (b. Caribbean, 1936 – d. France, 2017) entitled “Soft résistance” (‘Soft Resistance’) was a key moment in the rediscovery of this artist. Drawing on both minimalism and craft techniques, her variations of abstract and geometric motifs on cotton canvases serve as subtle visual scores.

With “NOVELTY Ltd.”, an original collaboration was engaged between two Brussels-based artists, Douglas Eynon (b. United Kingdom, 1989) and Erwan Mahéo (France, 1968). Shaking up the topography of the exhibition space, their work appeared as though it were the materialisation of a mental landscape.

For his exhibition “Punctuations & Perforations”, Tris Vonna-Michell (b. United Kingdom, 1982) brought together research, photography, film and writing in elegant, meticulous combinations that unveiled stories fragmented to the point of mystery. Dora García (b. Spain, 1965) subsequently transformed the space beneath the glass roof into a stage for daily performances.

“En angle mort” (‘In the Blind Spot’), the title of the exhibition by Jean-Luc Moulène (b. France, 1955), has a double meaning: ”in a blind spot”, and literally “in a dead angle”. Concrete, terrestrial, and subject to gravity and movement alike, his works come to life thanks to an ingenious system of mobile mirrors.

The work of artist duo Marie Cool (b. France, 1961) and Fabio Balducci (b. Italy, 1964) offers a unique kind of poetry through the precision and rigour of its repetitive gestures. The exhibition presents a series of their sensitive experiments that are conceived a means of signifying presence as well as broaching questions close to the murkier zones of perception.

“Des gestes à peine déposés dans un paysage agité”, the title of the exhibition by Ismaïl Bahri (b. 1978, Tunisia), translates as “Light Gestures in an Agitated Landscape”. For his first solo exhibition in Belgium, the Franco-Tunisian artist transforms the architecture of the Foundation’s Brussels exhibition space into a kind of optical instrument that plays with shadow and light and the boundary between appearance and disappearance: forms, objects, drawings and videos accompany and animate the natural light that filters into the space.

The series comes to a close with a solo exhibition by Jacqueline Mesmaeker (b. 1929, Belgium). Since the mid-1970s, Mesmaeker has developed an oeuvre at once discreet and original that includes drawings, films, sculpture, installations, photographs and published works. For her exhibition at La Verrière she presents a free composition made up of existing works and others produced for the occasion and inspired by the space. These pieces are organised around a black-and-white photograph of a landscape, captioned “Versailles avant sa construction” – Versailles before its construction. Starting from this enigmatic subtext, a reflection on the landscape and its construction takes shape, a treasure hunt that unfolds throughout the exhibition space.

Disciplines
Visual arts
Lieu
La Verrière
Brussels
Belgium
Begun in 2016, “Poésie balistique” is the second chapter in Guillaume Désanges’s artistic programming at La Verrière.
This exhibition series examines the gap between the rational, pre-determined nature of conceptual art and its results, through certain forms of abstraction.
Ismaïl Bahri transforms the architecture of La Verrière by playing with shadow and light and the boundary between appearance and disappearance. 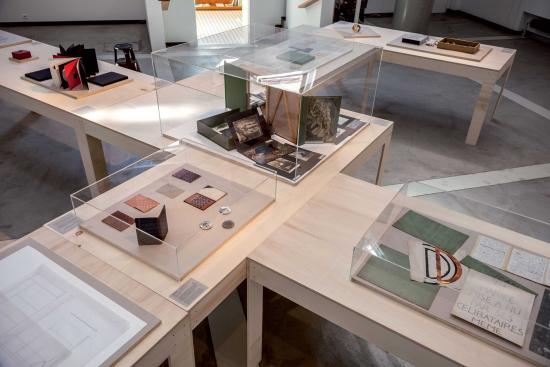