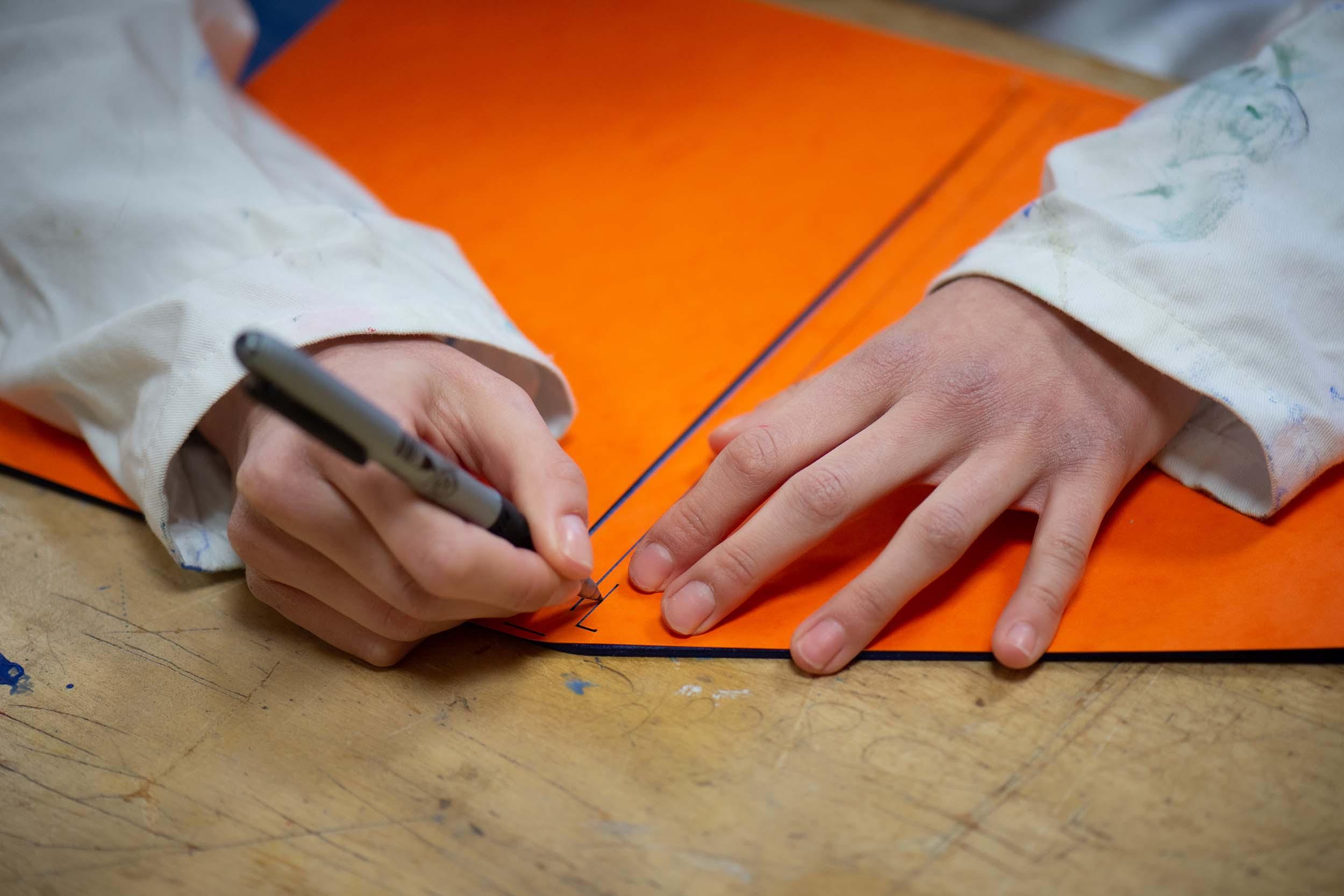 Manufacto session © Benoît Teillet / Fondation d'entreprise Hermès
In the 2020-21 school year, Manufacto, The Skills Factory, a programme launched in 2016 by the Fondation d’entreprise Hermès, took off for new horizons with trials in schools in the United Kingdom and Italy. In collaboration with local partners, the programme’s overseas expansion promises to widen its reach, introducing younger generations beyond France to artisan skills and know-how.

For 30 pupils at the Eleanor Palmer School in London, 2020 drew to a close with a unique collective adventure. At the initiative of Hermès Great Britain, and in collaboration with the Fondation d’entreprise Hermès, a group of primary school pupils took part in the Manufacto programme over the course of ten weeks, from September to December 2020. Aged 10 to 11, these pupils were accompanied in the step-by-step creation of a wooden lamp by craftspeople from the Goldfinger Factory, a local social enterprise initiative supported by the Foundation. The pupils were thrilled to work with wood, and to learn how to saw, sand and screw together the various components whilst discovering the rudiments of electronics, eventually creating a final product of which they could be proud. The experiment was a resounding success from the point of view of these young apprentice carpenters, as well as for their teachers and the craftspeople who oversaw the project.

In spring 2021, two more classes embarked upon the Manufacto adventure, this time at the initiative of Hermès Italy. At the Istituto Comprensivo Statale “Trilussa”, pupils aged 9 to 10 crafted a pouffe, while pupils aged 11 to 12 made their own boomboxes. Over the course of twelve sessions, they were accompanied by two seasoned craftspeople in these creative, educational projects, which were designed with Mercurio, a local charitable organisation that aims to combat educational inequality and disengagement through inclusive models. From February to May 2021, the pupils discovered the various aspects of upholstery: smoothing, painting, cutting, sewing, sticking and backing. Successfully mastering these gestures proved both surprising and satisfying for the pupils, who completed the experience with a new outlook on craft métiers.

These two overseas outings attest to the ever-growing interest in Manufacto in France and beyond, and demonstrate the possibilities for transposing and adapting the programme to each new environment. The success of these two pilot projects suggests a promising future for Manufacto in partner countries, expanding its reach as it continues introduce new generations to the world of craft skills.

Disciplines
Craftsmanship
Design
In the 2020-21 school year, Manufacto, The Skills Factory took off for new horizons in the United Kingdom and Italy.
In London, a group of pupils learnt step-by-step how to craft a wooden lamp.
In Milan, two classes discovered the various aspects of upholstery, successfully mastering the gestures of the craft.